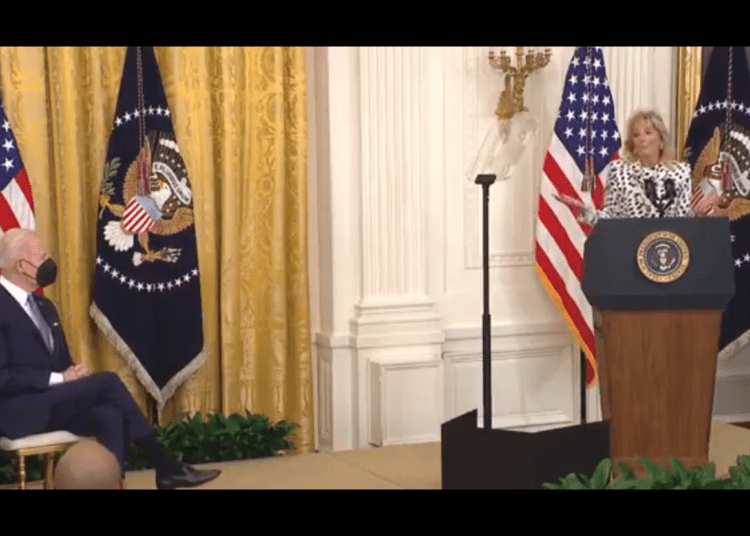 WASHINGTON – First lady Jill Biden mistakenly introduced Vice President Kamala Harris as the “President” on Monday, something so many have mockingly joked about since the Joe Biden/Kamala Harris duo landed in Washington.

The faux pas came during a Black History Month celebration at the White House. Following the flub, Jill Biden corrected herself and claimed she was joking, Fox News reported.

“As many of you know, our vice president’s historic path to the White House began before she could even walk, marching with her parents in the Civil Rights movement, or at least being pushed in a stroller,” Jill Biden said during the introduction.

“Since then, she has dedicated her life to pursuing justice and opportunity for all,” the first lady continued. “She is a partner to Joe, especially on issues like voting rights, and is proud to be the first, but not the last.”

Jill Biden then began to announce Harris as the “President” of the United States, but caught herself amid laughter from the audience and a shrug from President Biden.

Jill Biden introduces Kamala Harris as "the President," and then claims that she "just said that to make you laugh." pic.twitter.com/RMofb9pUL6

The first lady then tried to play off her gaffe as a joke, saying, “I just said that to make you laugh.”

In December 2020 before Joe Biden took office, he responded to the press regarding potential disagreements that he would likely have with Harris. He said, “Like I told Barack, if I reach something where there’s a fundamental disagreement we have based on a moral principle, I’ll develop some disease and say I have to resign.”

The comment left many people wondering what he meant and whether his presidency would even make it to starting line, Law Officer reported at the time.

“This is why he doesn’t do interviews because he is so incoherent; this is why they kept him in the basement for the majority of the campaign,” Fox Nation host Lawrence Jones said, reacting to the statement.

During the president’s first year in office, much of Harris’ politics have become administration policies, making Jill Biden’s blunder all the more eye-opening.