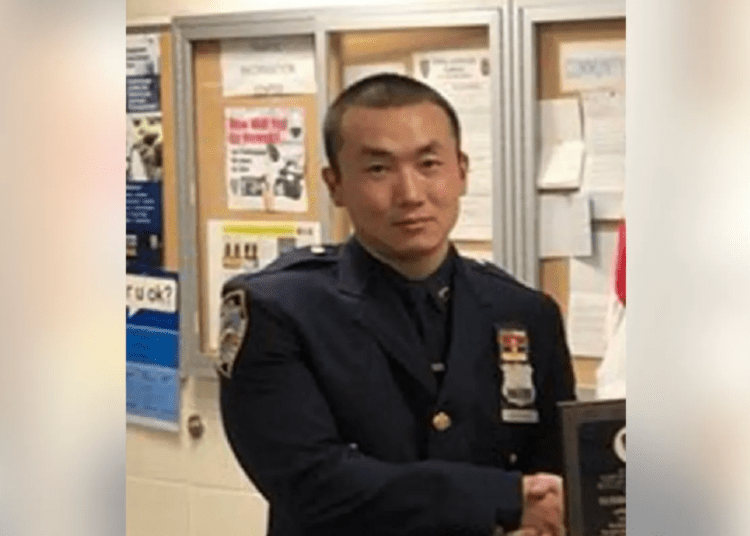 NEW YORK – Federal prosecutors in Brooklyn reportedly dropped their criminal case against an officer with the New York Police Department who was previously indicted for allegedly spying on behalf of the Chinese government.

Angwang was also a U.S. Army reservist who was granted a secret-level security clearance by the Department of Defense. He was arrested in September of 2020 after working as an officer with NYPD since 2014.

Angwang initially overstayed his visa but was later granted asylum in the U.S. by claiming he had been tortured by the Chinese government partly due to his Tibetan ethnicity.

According to the federal indictment, Angwang, who worked in the 11th precinct in Queens as a community liaison officer, was accused of using his position with NYPD as a means to spy on Tibetan immigrants and provide the People’s Republic of China (PRC) with access to senior law enforcement officials through invitations to various events, Fox reported.

Federal prosecutors also alleged that Angwang did not disclose that his parents were Chinese Community Party members. His father and brother each worked for China’s principal military force, the People’s Liberation Army (PLC), while his mother, father, and brother all reside in China, according to court documents.

Since the government’s dismissal lacked details, Law Officer is sharing some of the allegations made against Angwang at the time of the original indictment. The following excerpts were included in Law Officer’s September 2020 article when charges were first announced:

“Baimadajie Angwang, who works as a community affairs officer in the 111th Precinct in Queens, allegedly began acting on behalf of the People’s Republic of China in May 2018 after being recruited by an unidentified ‘handler’ stationed in the Chinese consulate in Manhattan, according to a complaint unsealed in Brooklyn federal court, New York Post reported.”

“Angwang, (then) 33, allegedly ‘served as an intelligence asset’ whose duties included gathering information on potential opponents of the Chinese government, including members of ‘religious and ethnic minorities.’”

“His handler, identified only as ‘PRC Official-2,’ is believed to have been assigned to a division of the Chinese United Front Work Department that’s responsible for ‘neutralizing sources of potential opposition to the policies and authority of the PRC,’ court papers say.”

“Angwang is a naturalized U.S. citizen, the Post reported.”

“Wiretapped phone conversations allegedly caught Angwang boasting about his NYPD job, including by telling his handler to let his bosses ‘know, hey, you have someone in the police here’ and saying they ‘should be happy…because you have stretched your reach into the police.’”

“Angwang also ‘stated that his motivation to be promoted in the NYPD was to assist the PRC and bring glory to China and that if he ‘could not be promoted within the NYPD, he stated that he might as well as be a government employee in China,’ according to court papers.”

“Angwang is also charged with wire fraud, making false statements and obstruction. As a result, he faces up to 55 years in prison if convicted.”