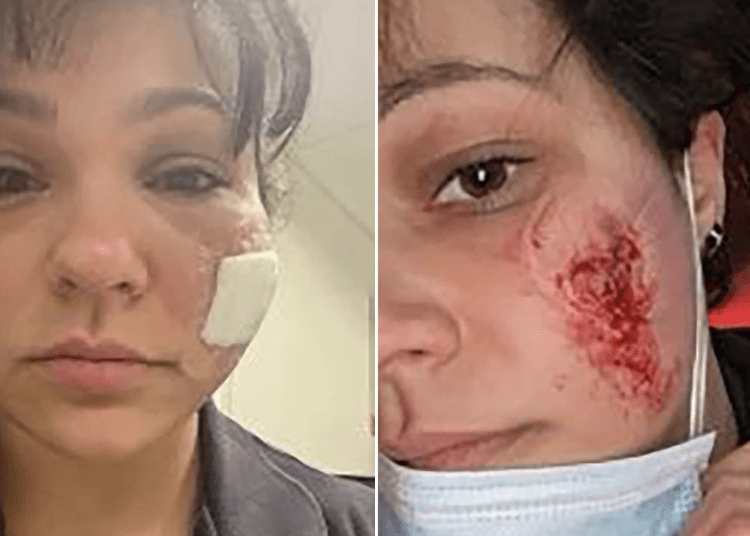 Photos show a medic's wounds after a combative patient in Brooklyn bit her on the face on March 5, 2021. (Anthony Almojera/Twitter)

NEW YORK — An FDNY medic was bitten in the face by a crazed patient during a call in Brooklyn early Friday — an attack that the department’s commissioner described as “horrific.”

The paramedic, who needed four stitches to her left cheek, will be “scarred for life” as a result of the violent incident, which unfolded around 1:45 a.m. during a call about a patient with “altered mental status” in Sheepshead Bay, FDNY sources said.

Medics were trying to treat the patient, a 17-year-old girl, and stop her from injuring herself, the sources said, according to the New York Post.

That’s when she apparently freaked out, lunged down a staircase and sank her teeth into the EMT’s face, according to sources.

Fire Commissioner Daniel Nigro said in a statement that the injuries were “horrific.” (Anthony Almojera/Twitter)

Fire Commissioner Daniel Nigro said in a statement that the injuries were “horrific.”

“No one should be attacked when they are at work, and certainly not EMTs and Paramedics who respond to every incident with one mission — to save lives,” Nigro said.

Anthony Almojera, an EMS lieutenant in Sunset Park who is vice president of Local 3621 of the FDNY Uniformed EMS Officers, posted graphic photos showing the wound and the medic’s bandaged and swollen face, The Post reported.

“Every call we go on can be our last,” he wrote on social media. “The dangers are everywhere. All the more reason we deserve the same pay and benefits as the other 911 agencies.”

One of the images he shared appeared to be a post by the injured medic, who wasn’t publicly identified.

“I just got bit by a human being just trying to get her onto a stretcher & to the hospital,” it read.

Another image of the FDNY medic’s injuries that were posted to Twitter. (Anthony Almojera/Twitter)

The teen was taken to Coney Island Hospital and later charged with assault in the second degree and assault with intent to cause physical injury, police and sources said.

“We need genuine help in protecting our members,” Almojera told The Post. “We get attacked and nobody gets prosecuted.

“We not only need the same pay and benefits as the other 911 agencies, NYPD and Fire,” he added, “but the same protections as well!”