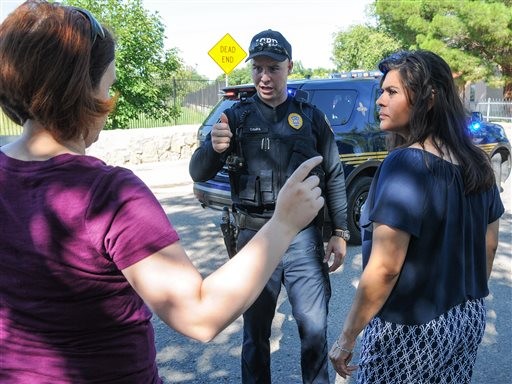 LAS CRUCES, N.M. (AP) — New Mexico Gov. Susana Martinez is promising that the "coward" who set off explosions outside two Las Cruces churches will be caught.

There were no injuries or deaths from the blasts outside Calvary Baptist and Holy Cross Roman Catholic in Las Cruces, Las Cruces police spokesman Danny Trujillo said. Each building sustained minor damage.

Authorities are working to determine who planted the explosives and have not said if more than one person is being sought. They are also trying to determine what materials were used and whether the blasts were related.

"It doesn't appear to be coincidental because of the timing, but you never know," Trujillo told The Associated Press.

Several agencies including the FBI, the Bureau of Alcohol, Tobacco, Firearms and Explosives and New Mexico State Police are assisting with the investigation.

She said that if the intention was to bring fear to those who worship, it was a failed effort.

The first explosive device went off at about 8:20 a.m. in a mailbox on a wall near the administrative entrance to Calvary Baptist. According to police, several worshippers were inside the church at the time, but services hadn't started.

According to churchgoers, the blast shook the building and there was debris around the damaged mailbox. Las Cruces police Sgt. Robert Gutierrez described seeing "just a lot of paper shreds."

The next blast came from a trash can outside Holy Cross Catholic at about 8:40 a.m. as Monsignor John Anderson was helping pass Communion.

"I was right in the middle of saying the words 'take and eat, this is my body,' and there was a pow! I mean, I knew it had to be more than a gunshot," Anderson told the Las Cruces Sun-News newspaper (http://bit.ly/1ME7PEp). "I didn't know if it was a shotgun blast, I didn't know what. But it was very loud, and I just kept on saying the words."

Ann Marie Sullivan, a college student attending Mass, said it "sounded like something had fallen off and shattered the glass in the back."

The trash can was near a glass entryway, which was damaged.

Police arrived and evacuated the church and blocked off surrounding streets. Bomb-sniffing dogs were brought in to search the building.

Services were canceled for the rest of the day at both churches, which are less than 4 miles apart. Trujillo said he didn't know of any recent threats involving either church.

Other churches in the city have contacted police about what, if anything, they should do. Trujillo said police are advising them to look out for anything suspicious, but don't inspect anything themselves.

"Don't go poking around in trash cans or mailboxes," Trujillo said, according to the Sun-News. "If you have any suspicion of anything that's out of the ordinary, please call to police and leave it up to the officers to look it over."