El Paso ‘hero,’ not so much … Secret Service arrests man prior to White House medal ceremony 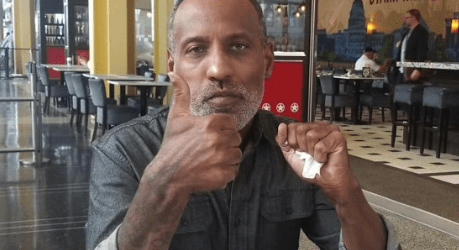 WASHINGTON – A Texas man touted as a hero after last month’s mass shooting at a Walmart store in El Paso, Texas, was detained by Secret Service agents upon his arrival at the White House on Monday due to an outstanding criminal warrant, according to a report.

Moreover, authorities now say Chris Grant, 50, may have lied about his supposedly heroic deeds during the gunfire that left 22 people dead and about two dozen more wounded.

Grant had traveled to Washington to be honored by President Trump along with first responders and others for their responses to recent shootings in El Paso and Dayton, Ohio. The Dayton shooting left 10 people dead and 27 wounded.

'Nobody bothered to check with us'

Grant was arrested at the White House due to an outstanding warranthttps://t.co/zCs6aNJ5PU

Grant was hospitalized last month after being shot in the ribs and a kidney in the Aug. 3 carnage. The wounded man said in a series of interviews with major news outlets that he was injured when he threw soda bottles at the gunman to distract him while other shoppers fled. A GoFundMe page raised nearly $17,000 on his behalf.

Nevertheless, the El Paso Police Department held a different perspective. EPPD spokesman Sgt. Enrique Carrillo told the Washington Examiner that Grant’s “statements were inconsistent with what was revealed on video.” He said Grant was visible in the footage but did not reveal what his actions were.

“Nobody bothered to check with us,” Sgt. Carrillo told the Examiner. “They would have been informed, as I am telling you now, that our detectives reviewed hours of video and his actions did not match his account.”

President Trump was to present Grant, along with four other civilians, a Heroic Commendation in a White House ceremony Monday. During that same event, Trump presented the nation’s highest award for public safety to six Dayton police officers who responded to the mass shooting in that city.

Grant was not present at the ceremony. He was arrested beforehand by the Secret Service for being a “fugitive from justice,” according to a spokesperson for the Washington Metropolitan Police Department. His mother, Minnie Grant, 82, accepted a signed certificate in his place, as the president spoke about Grant’s account of what transpired during the shooting.

It was not clear what criminal charge was connected to the warrant leading to Grant’s arrest on Monday. However, Texas court records show he has a lengthy criminal history involving theft and evading arrest, the Washington Examiner reported. He was given an eight-month jail sentence in March after pleading guilty to auto theft. Furthermore, he received an 18-month sentence in 2016 after pleading guilty to stealing televisions from a department store in Richardson, Texas. He also pleaded guilty to evading arrest in Collin County that same year.

In an interview from his hospital bed last month, Grant recounted his version of what went down between him and the gunman to CNN host Chris Cuomo.

“To deter him, I started just chucking bottles, I just started throwing bottles, random bottles at him,” Grant said. “And I’m not a baseball player, so one went this way, one went that way. And then one went right towards him and then that’s when he saw me. … When I got hit, it was like somebody put a hand grenade in my back and pulled the pin.”

Grant also mentioned in a separate interview that he saw the gunman allow white and black shoppers leave the store to escape his bullets. Police said the shooter posted an anti-Hispanic manifesto online before he carried out the attack.