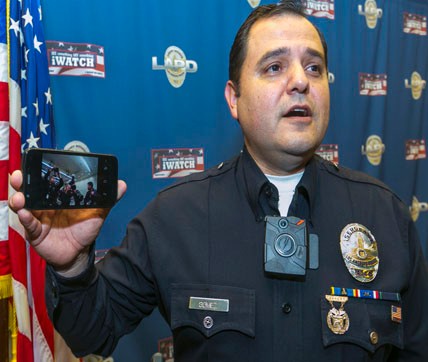 There’s a lot of talk about video in policing lately, nearly all centered around citizen taping of officers and the implementation of body-worn cameras. However, the growth of videos impact on police goes beyond those two arenas. One of the most-viewed pieces of police-related video was shot with a dash cam and features a Dover (Del.) cop lip-syncing to a popular song. Master Corporal Jeff Davis’ performance to Taylor Swift’s Shake It Off has received nearly 35 million views and has turned Davis into a celebrity of sorts.

Davis told the audience at the most recent Social Media the Internet and Law Enforcement Conference (SMILE ) in Phoenix (Ariz.) that the most positive result of the video wasn’t just the millions of people who enjoyed it but rather that it touched so many  law enforcement officers, especially during the stressful times we live in.

Other agencies have also had great success creating videos portraying their officers in ways that resonate with community members. The Rosenberg (Tx.) Police Department’s “Hip Hop Cops” video took off with nearly 5 million views. The Victoria (Tx.) Police has produced some video with very impressive production quality, all with talent from within the department. Also in Texas, The Arlington Police have become masters of doing a lot with relatively little as well as incorporating special effects into their productions. Examples abound at agencies throughout the U.S. who have had similar success with video.

Periscope and Meerkat are two new apps that launched in March. Both allow the user to broadcast live from a SmartPhone to anyone who wants to tune in, and anyone can comment or ask questions live below the video. By default, videos are available for just 24 hours unless the creator takes measures to save them for a longer time period.  While both are designed to stream video live through Twitter, Periscope is owned by Twitter and therefore works more seamlessly through it.

Periscope in particular, was heavily used during the Baltimore riots in ways some observers are saying is evolving journalism. I would argue that it can, and should, evolve policing as well. Chief Inspector Kerry Blakeman of the West Midlands (U.K.) is widely known in social media circles as an early adopter of the newest video streaming technology. He’s very adept at streaming police events through Google+ HangoutOuts OnAir and was quick to pick up on video streaming apps like Bambuser and Twitcam going back years now. So it’s no surprise he’s starting to experiment with the opportunities afforded with Periscope.

As the commander who oversees traffic for the West Midlands, he zeroed right in on the live element, saying “it’s really starting to build wheels.” He recently used Periscope to broadcast several traffic stops during a day called “Behind the Wheel”. He incorporated the hashtag #btwlive and streamed several live traffic events including interviews with his traffic officers as well as his own commentary.

“Why shouldn’t we show the public?” he asked. “We’re satisfying their interest in policing and showing them what we do in policing… and we’re doing it live.”

With social media, each passing day the public is growing more accustomed to getting more and more information from its police. In Idaho, Chief Scott Haug of Post Falls PD is experimenting with Periscope as well. He plans to use the app first during his virtual ride-a-longs and added, “This will continue the effort of building relationships with the community to let them know what our officers respond to and the types of calls they’re dealing with. I’m hoping it will be very beneficial.”

In Denton, Texas, Public Information Officer Ryan Grelle has used Periscope to show officers getting OC sprayed and other portions of police academy training. But he has plans to show many more aspects of policing, “Because of the openness; the transparency of what we’re showing. We still get some of the ‘this is stupid why are you doing this’ from civilians asking why are you risking lives of officers of how you’re doing this. But how officers operate isn’t such a secret any more. With this technology, at least we can show it right.”

The greatest thing about Periscope and Meerkat for police is that unlike some social networks that allow you to put forward your more favorable self, these apps are gritty and real and therefore absolutely well-suited to police work.

Both offer ideal opportunities to tell the people about the work police do every day in a way that is authentic, unedited and hugely interesting to citizens. Like everything else in social media, it’s not a free-for-all. Agencies need to think about procedures for when something being broadcast live goes south. What’s the best course of action in those cases? Then of course comes retention of anything that might be evidentiary. But none of these issues are insurmountable or ones that should give reason to not use it. These technologies are incredibly easy to use and ideal for letting people see the excellent and very interesting work that police really do.