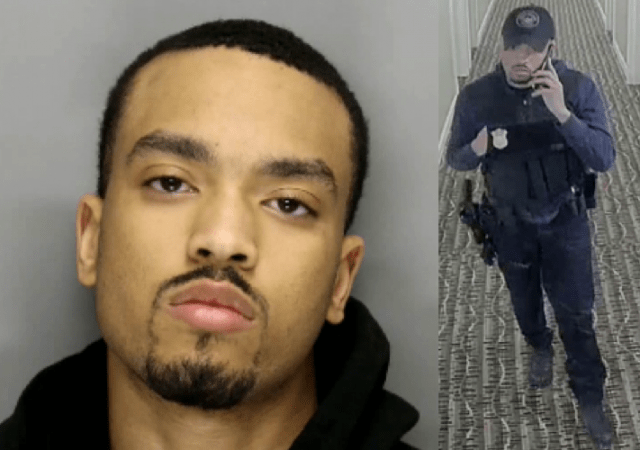 COBB COUNTY, Ga. – A disgraced ex-cop is in jail, accused of wearing his uniform while he committed an armed robbery.

WSB-TV’s Michael Seiden said several of his sources within the Atlanta Police Department tipped him off to the story, calling Thorne an embarrassment to the agency.

The armed robbery occurred Oct. 17 inside the Comfort Inn and Suites off Windy Hill Road in Cobb County during the late morning hours.

Surveillance video shows Thorne dressed in his police gear, which included a bulletproof vest, hat, full uniform, a firearm and even a police badge.

But what the hotel staff didn’t know at the time was that this 22-year-old disgraced ex-cop, who is now under arrest and charged with multiple felonies, wasn’t there to conduct an investigation, reported WSB-TV.

Instead, Cobb County police say, he was there to commit an armed robbery.

The crime occurred inside a hotel room where two guests were forced to surrender $800 in cash and an iPhone valued at $700.

Cobb police worked the case for days and through the help of APD, they identified Thorne as their suspect.

However, Cobb police did not disclose additional details.

Seiden looked into Thorne’s record and learned he joined APD in 2017, working as a patrol officer on the city’s southeast side until earlier this year, according to WSB-TV.

In a statement, an APD spokesman said:

APD’s Office of Professional Standards was investigating then-Officer Justin Thorne after receiving an allegation in late September that Thorne had offered to take payment from a suspect with an outstanding warrant in exchange for making the warrant go away. When Thorne was asked by OPS to make a statement about the allegation, he chose to abruptly resign on October 1.

Seiden contacted Cobb County police in an attempt to learn more about the circumstances surrounding this armed robbery. He also wanted to know if there are additional victims or suspects.

However, Seiden confirmed the two victims are from Arkansas and were not seriously injured during the incident.