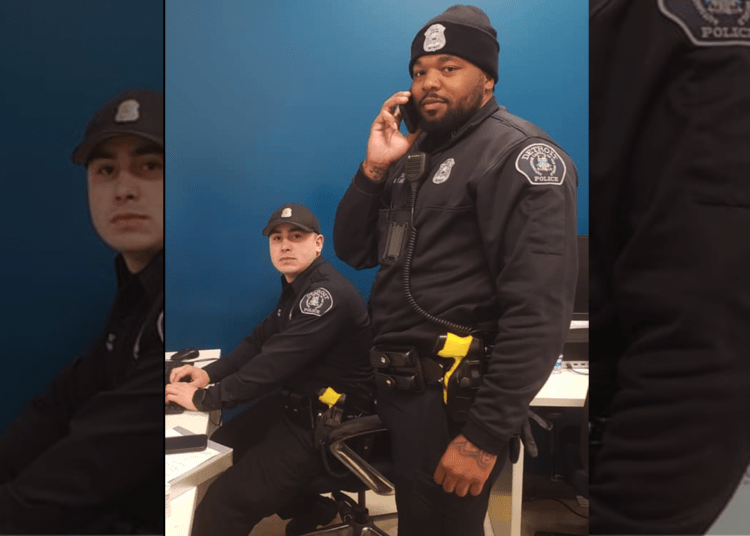 Officers Flannel and Parrish were praised for their work.(Eighth Precinct Community Facebook)

DETROIT — Two police officers working out of the Eighth Precinct of the Detroit Police Department were credited with rescuing four children who were abducted on the way to school earlier this week.

Officers Flannel and Parrish conducted a traffic stop on a vehicle for running a red light. The driver said she was in a hurry to get children in the car to school, according to information provided by police.

The officers questioned the woman about what school the children attended, and she could not provide an answer.

Therefore, they asked the suspect to get out of the vehicle as they continued their investigation.

Police asked the 11-year-old, “Do you know this woman?” The boy shook his head no.

“A Ring doorbell surveillance camera captured images of the woman’s van pulling up to where the children were as they walked to school on Tuesday. Detroit police say she then convinced all four of them to get in her van and took off,” WXYZ reported.

As a result of their investigation, officers took the suspect into custody.

The Eight Precinct Community Facebook post said, “It was later determined she had kidnapped the children on their way to school. Four children ages 11 to 5 were forced into the vehicle.”

Flannel and Parrish were praised for their work.

“In doing so they were able to take a kidnapper off the streets, and safeguard the 4 children from any hurt, harm and danger,” according to the post.

The suspect was identified as Stephanie Marie Binder, 37, according to the Wayne County Prosecutor’s Office, CBS Detroit reported.

Prosecutors say Binder was driving a stolen vehicle when she kidnapped the children.

Authorities confirmed the suspect is not related to the victims, ages 11, 8, 7, and 5.

The children’s parents spoke to the media and said how thankful they are to have their kids safely returned.

“I just thank everyone involved that my children are back home safe,” said Shayla Burleigh, the children’s mother.

“She preyed on my youngest one. The oldest one didn’t want to leave his youngest brother,” said Burleigh. “He did what he had to do.”

“I just want to congratulate the City of Detroit police officers for performing their duties,” said Keith Lindey, the father of one of the children. “I am thankful.”

Binder was arraigned Friday and given a $5 million cash/surety bond, according to CBS Detroit.