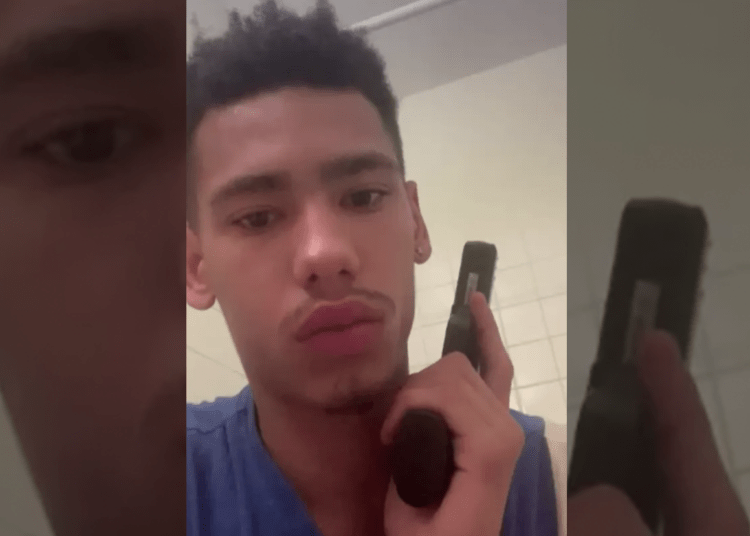 Daunte Wright, the 20-year-old Minnesota man who was killed in a police-involved shooting in April, recorded a selfie video while playing with a handgun in a woman’s bathroom shortly before he allegedly shoved it in her face and tried to rob her. (Osseo Police Department)

HENNEPIN COUNTY, Minn. — The estate of Daunte Wright, 20, who was fatally shot by a former Brooklyn Center officer as he fought to get away from police during a detention, was slapped with a third lawsuit on Monday, according to Fox News.

The lawsuit was filed on behalf of a female crime victim who accused Wright of choking her at gunpoint as he demanded cash during a robbery in December 2019.

The new civil complaint comes a day before jury selection is expected to begin at the Hennepin County Courthouse in the trial for Kim Potter, who is facing manslaughter charges in connection to Wright’s death, Law Officer reported. The circumstances are also the origin of the felony arrest warrant that was issued for Wright when he fought with officers in his desire to get away.

Potter reportedly discharged her firearm as Wright wrestled to free himself from officers, while intending to deploy her Taser, according to reports.

Mike Padden, the attorney handling all three civil lawsuits against Wright’s estate, provided a copy of the latest civil filing to Fox News Digital on Monday.

The suit identifies the victim as a female adult Minneapolis resident by the initials “C.V.” and describes a December 2019 incident already explained in an initial arrest warrant filed by the Osseo Police Department.

According to the initial arrest warrant, Wright and a high school acquaintance, Emajay Maurice Driver, arrived for a party at an apartment in Osseo, in Hennepin County, Minnesota, but didn’t have a ride home. As a result, two women who rent the apartment allowed them to layover at their place. But rather than a simple “thank you” the next day, Wright and his cohort hatched a plan to rob the women.

On the morning of Dec. 1, 2019, one of the women left to take out $820 in cash to give to her roommate to pay rent. After paying her roommate, that woman left again for work as Wright and Driver were waiting for a ride.

The woman who remained behind told police that Wright uttered to Driver that he didn’t have to work that day. She reportedly overheard them say they should “hit some stains,” which she understood as slang for robbing people, Fox reported.

Once a vehicle arrived to pick them up, the woman said she would leave with them. However, Wright turned around and blocked the door. He then pulled “a black handgun with silver trim” out and pointed it at the woman, demanding cash she had tucked into her bra to pay their rent, according to the criminal complaint.

“Are you serious?” the victim asked, to which Wright replied, “Give me the f***ing money, I know you have it.” The complaint said she then asked him if he was serious and he said, “I’m not playing around.”

Wright aggressively choked the woman until she managed to get free by kneeling down and screaming, according to the complaint. She yelled and told them to get out, saying the police were nearby.

Prior to the robbery, Wright recorded a 13-second video while he’s toying with a firearm in the woman’s bathroom. Soon after, he reportedly shoved it in her face. Detectives found the incriminating footage on his phone during their investigation, according to court documents.

Wright was later arrested for the crime before being released from custody. He was subsequently accused of violating the terms of his release in the robbery case, which led to the warrant for his arrest that was discovered by Brooklyn Center Police when they stopped him for unrelated traffic infractions on April 11, Law Officer reported.

The civil lawsuit filed in Hennepin County Monday accuses Wright of three counts – assault and battery, sexual assault, and intentional infliction of emotional distress related to the incident, according to Fox News.

Padden writes that Wright’s actions constitute sexual assault because he “tried to take the money by reaching under her shirt and physically touching her breasts.” Since Wright “subsequently lost his life in an unrelated high-profile matter,” Padden says “the charges were not fully litigated for his criminal conduct regarding C.V. before he passed away.”

“The conduct of Wright was extreme and outrageous and utterly intolerable in any civilized society,” Padden noted.

Ben Crump — the attorney who secured $27 million settlement with the City of Minneapolis for George Floyd’s family — represents Wright’s family.

Report pulls back the curtain on DFL sheriff’s shocking behavior