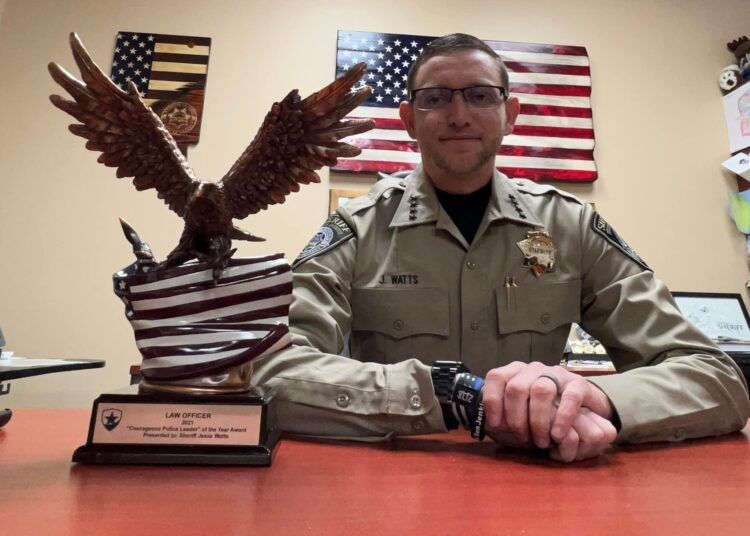 Eureka, Nevada – Law Officer is proud to announce Eureka County Sheriff Jesse Watts as the winner of the 2021 Courageous Leader of the Year. Inspired by the seminar and book, The Courageous Police Leader: A Survival Guide for Combating Cowards, Chaos & Lies, Law Officer announced the award in early 2020. Wauwatosa Police Chief Barry Weber was the first recipient.

This years award was given to Sheriff Watts after he embraced each aspect of Courageous Leadership. Travis Yates, the author of “The Courageous Police Leader,” tells us that Sheriff Watts embodies every aspect of what is needed in law enforcement today.

“Sheriff Watts has embraced communication to his community at the highest level while not backing down in the face of corrupt politicians that are seeking to not only destroy the very fabric of law enforcement but the safety of the citizens. Jesse has certainly been attacked for his courage and his resolve made him a leader that we certainly wanted to recognize,” Yates said.

Yates travelled to Eureka, Nevada this week to personally give Sheriff Watts the “Courageous Police Leader of the Year” Award. His comments at the ceremony are below.

First, I want to thank everyone for being here. We launched the Courageous Leadership Seminar in 2017 in an effort to encourage all of law enforcement to take the courage they display daily on the streets to those in the ranks that play such an integral part in the future of the profession. In an effort to get that message to the masses, a book was launched in 2019 called the Courageous Police Leader and unfortunately we have found in the last two years exactly what cowardly leadership can not only do to this profession but this country.

But in the midst of the chaos, courage has prevailed in many ways. In an effort to honor those courageous men and women, Law Officer launched the Courageous Police Leader of the Year in 2020. Wauwatosa , Wisconsin Police Chief Barry Weber received that award.

Before I announce the 2021 Courageous Police Leader of the Year, I want to briefly tell you what is meant by Courageous Leadership. The truth is, President Ronald Reagan had it right.

He said “There are no easy answers, but there are simple answers. We must have the courage to do what we know is morally right.”

Courageous Leadership is about doing what is right regardless of the costs and here in Eureka County you have someone that has not backed down from what is right. He has built policies and a policing strategy that helps his employees but also his community. He has placed a strong emphasis on communicating truths to his community. He has ensured that his employees play an integral part in all that he does. And most importantly He has defended his agency and his community from cowardly and corrupt politicians that seek to destroy this fine profession.

The reciepient of this years award has a simple mantra: Faith-Family and Freedom.

I can’t think of a more inspiring and motivating way to live and lead.

Indeed, courage is hard to find today but the cup overflows in Eureka County and it is truly an honor to present the 2021 Courageous Police Leader of the Year to Eureka County Sheriff Jesse Watts.

Law Officer is taking applications for the 2022 Courageous Police Leader of the Year. Applications should address the core components found in the book by the same name.

You may submit your application to our contact page.

Share and speak up for justice, law & order...
Tags: courageous leader of the yearEurekamust-readNevadaSheriff Jesse Watts