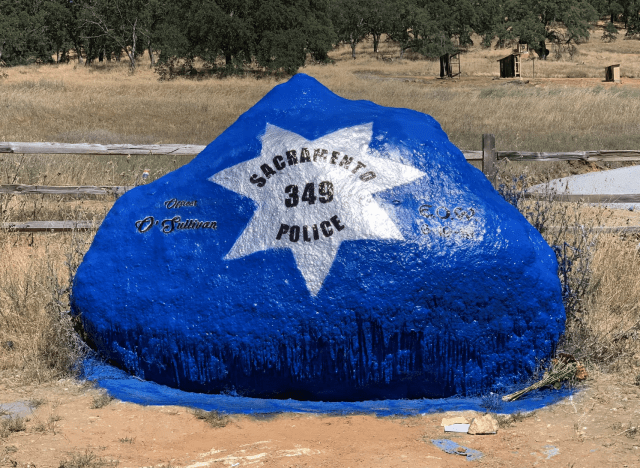 EL DORADO HILLS, Calif. – An El Dorado County landmark has been painted to honor fallen Sacramento police Officer Tara O’Sullivan who was shot and killed in the line of duty last week.

Members of the El Dorado County Sheriff’s Department say they escorted the family of O’Sullivan to the spot known as the “Rock” or “Rocks,” where two large boulders had been painted in honor of Tara, reported Good Day Sacramento.

The rocky landscape was covered in blue. On one boulder the thoughtful community members painted Tara’s Sacramento Police Department badge. The other had her name flanked by hearts, and underneath, a three-leaf clover, and next to that, Spongebob Squarepants.

Typically painted to honor birthdays and special days like the 4th of July, the rocks were used for a much more touching display on Saturday.

A statement from the El Dorado County Sheriff’s Department read, in part: “The strength of her family, her academy class and the law enforcement community is truly humbling. Officer O’Sullivan, thank you for your service.”

It read, in part: “If you are driving down El Dorado Blvd – take a look and think of Officer Tara O’Sullivan and her service to all of us.”

The Rocks are located near the intersection of Olson Lane and El Dorado Hills Boulevard.