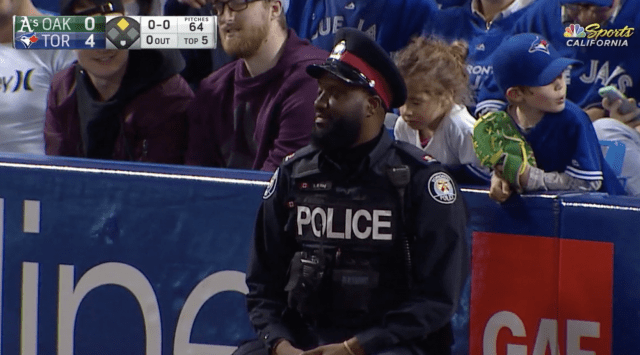 TORONTO – There are some pretty good perks to being a police officer working major league baseball games. As long as the fans behave, it’s a nice gig.

Moreover, the assigned seating can be incredible—in the dugout or on the field in foul territory. But it’s all fun and games until the ball finds you; and in a split second you forget your role.

As you will see in the video below, there is one police officer who got caught “responding” instead of “watching,” a natural reaction for a uniformed officer, yet “out of bounds” during a sporting event.

The embarrassing moment happened to a Toronto officer at Saturday’s A’s-Blue Jays game. In the fifth inning, Ramón Laureano lined a ball down the right-field line. It was hit just slow enough that there was a chance for Laureano to potentially stretch it into a triple.

Unfortunately, the officer did not notice that umpire Alfonso Marquez had already called the ball fair, reported MLB.com.

Okay, we can’t pass up the cliché, “No harm, no foul,” expect the ball wasn’t foul.

If Laureano’s hit had been foul, we might have commended the officer on his smooth hands and a nice catch. After all, it was a one-handed grab of a sharply hit ball with some English on it. Instead, interference was called on the play and Laureano had to settle for a double, though he did eventually come around to score.

On the other hand, the officer will likely gain notoriety (albeit it unwelcomed) and get featured in a video montage of “embarrassing moments.”

Nevertheless, it’s hard to blame the officer. Instincts took over, and you’d be hard-pressed to find someone who couldn’t relate to this kind of natural reaction. Maybe it’s accidentally hitting print on a 78-page document that you didn’t need. Or perhaps it’s closing a window of 10 tabs that you were keeping an eye on when you meant to exit something else.

Or maybe it’s dropping your pants in front of an entire ballpark after a base hit.

Former big leaguer Steve Lyons has been watching this replay for years. Consequently, it’s tough to beat that in terms of embarrassment, anyway. To our blue brother in Toronto, we are smiling with you! What else can you do?