The MIT grad went viral earlier this year when he announced his new role as the deputy assistant secretary of the Office of Spent Fuel and Waste Disposition in the U.S. Department of Energy. 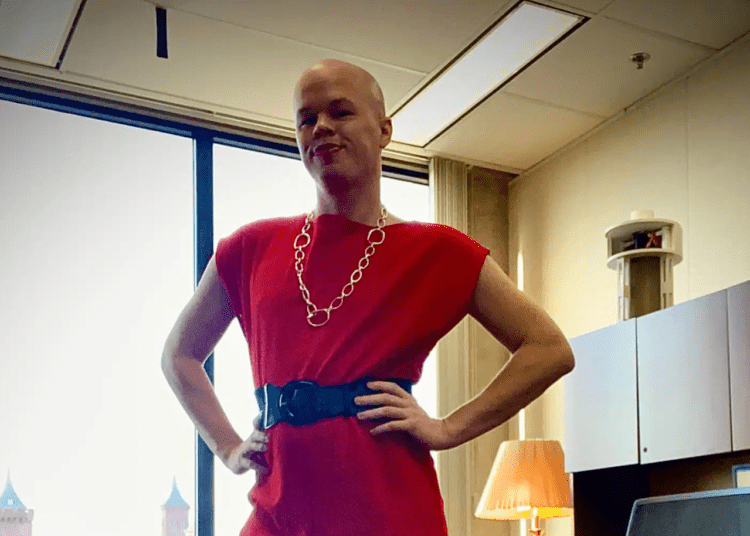 MINNEAPOLIS – Sam Brinton, one of the first “openly genderfluid individuals in federal government leadership,” was charged with felony theft last month after allegedly stealing a woman’s luggage at MSP Airport.

The MIT grad went viral earlier this year when he announced his new role as the deputy assistant secretary of the Office of Spent Fuel and Waste Disposition in the U.S. Department of Energy.

“As one of if not the very first openly genderfluid individuals in federal government leadership, I was welcomed with open arms into the Department of Energy all the way up to the Secretary whom I shared the stage with in a Pride month celebration panel just today,” Brinton wrote on Twitter at the time.

He said he is not a Biden appointee but instead was hired as a career employee in the Senior Executive Service. Brinton accepted the job in February and began in June, according to media reports.

Prior to working in government, Brinton was an anti-conversion therapy activist who taught “Kink 101” workshops on college campuses, according to The National Pulse. A photo from one of these workshops shows Brinton in a dress as he stands over three males in leather dog masks.

Brinton teaches a “Kink 101” workshop at the University of Nebraska at Omaha. (Instagram via The National Pulse)

“One of the hardest things about being a handler is that I’ve honestly had people ask, ‘Wait, you have sex with animals?’” Brinton said. “They believe it’s abusive, that it’s taking advantage of someone who may not be acting up to a level of human responsibility … The other misperception is that I have some really messed up background, like, did I have some horrible childhood trauma that made me like to have sex with animals?”

Brinton, who goes by the name “Sister Ray Dee O’Active,” attended the group’s 2021 “Lavender Mass” where he paid tribute to “Daddy Fauci,” The Pulse reports.

According to the Washington Examiner, Brinton once talked with college students about “how he enjoys tying up his significant other like a table, and eating his dinner on him while he watches Star Trek.”

Law enforcement at the Minneapolis-St. Paul (MSP) International Airport were alerted to a missing suitcase in the baggage claim area on Sept. 16. The adult female victim said she flew into MSP on a Delta flight from New Orleans and went to retrieve her checked bag at carousel seven.

Airport records confirmed the navy blue Vera Bradley roller bag arrived at 4:40 p.m. but was missing from the carousel. So law enforcement reviewed video surveillance footage from the baggage claim area and observed Brinton removing a navy blue roller bag from carousel seven, according to a criminal complaint.

The complaint says Brinton removed a luggage tag from the bag, placed it into a handbag he was carrying, and “then left the area at a quick pace.” Brinton arrived at MSP Airport around 4:27 p.m. on an American Airlines flight from Washington, D.C., but did not check a bag, meaning he had no reason to visit baggage claim, according to the complaint.

Police showed the surveillance video to the victim and she confirmed it was her bag.

Brinton left the airport in an Uber for a stay at the InterContinental St. Paul Riverfront hotel, where he checked in with the blue bag, the complaint says.

He returned to MSP on Sept. 18 with the bag in hand for a departing flight back to Washington, D.C., authorities allege.

Surveillance video from Dulles International Airport shows Brinton traveling with the bag on an Oct. 9 return trip from Europe, the complaint notes.

The victim said the estimated value of the bag and its contents was around $2,325.

Police questioned Brinton about the missing bag in an Oct. 9 phone call and asked him directly if he “took anything that did not belong” to him.

“Not that I know of,” Brinton allegedly responded. He later admitted to taking the bag but said the clothes inside were his, according to the complaint.

“If I had taken the wrong bag, I am happy to return it, but I don’t have any clothes for another individual. That was my clothes when I opened the bag,” he told police, according to the complaint.

Brinton allegedly called the investigating officer two hours later and apologized for not being “completely honest.” This time Brinton said he took the bag because he was tired and thought it was his, the complaint says.

He allegedly told police that he realized the bag didn’t belong to him when he opened it up at the hotel but “got nervous” and didn’t “know what to do.” Worried that people would think he “stole the bag,” Brinton told police he left the victim’s clothes in the drawers in the hotel room, according to the complaint.

Brinton said he brought the bag back to D.C. with him because it would have been “weirder” to leave a bag in the hotel room, according to police.

Police told Brinton how to return the bag to Delta, but as of Oct. 27 the victim still had not received her bag back.

Police also learned that no clothing was recovered from the hotel room.

Brinton’s first court hearing is scheduled for Dec. 19 in Hennepin County. Alpha News attempted to contact Brinton via email but received an automatic reply saying he is on leave and unable to access his email. The Department of Energy declined to comment. Brinton’s attorneys did not respond to multiple requests for comment.

About the author: Anthony Gockowski is Editor-in-Chief of Alpha News. He previously worked as an editor for The Minnesota Sun and Campus Reform, and reported for The Daily Caller.