The sacrifice of Officer Chris Amorosa made a tremendous impact 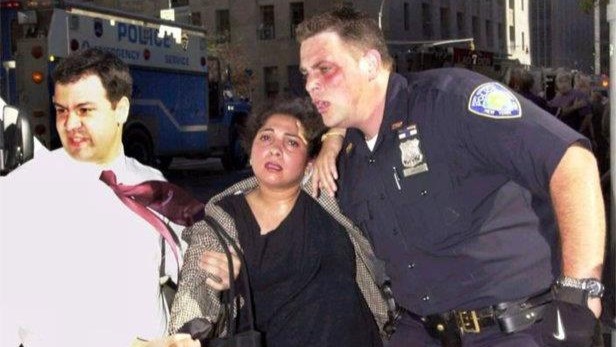 Twenty years ago, I was a punk fifteen-year-old kid who had no idea what he wanted to do with his life other than play football. On September 11, 2001, I was in biology class, and I was told a plane had flown into the World Trade Center.

My teacher turned on the news and I saw the second plane hit the second building live. I then ran to French class and watched as the towers fell. I watched as people, covered in dust, ash, soot, fled as bodies fell amidst flames, smoke, and concrete. I watched as police officers, fire fighters, and paramedics ran towards what normal people fled.

Here’s a famous picture of one such officer. As he ran into tower two for the THIRD time, he found a pregnant woman having an asthma attack. He grabbed her and helped her to safety.

Lt. Col. Dave Grossman would teach you that the human body is an amazing instrument. You can, in this image, see that the female has a flushed face. She is reaching safety and she finally feels safe. Officer Christopher Amoroso had provided that safety for her.

As you look at that picture, you will see that aside from the bruising already present on his face, his face is pale. He is experiencing vasoconstriction. Something your body does when you enter fight or flight. It is literally your body preparing to absorb damage and not bleed out.

It’s because she’s safe and he knows he’s going back. Officer Amoroso went back for the fourth time… and the tower would collapse on him. He would never see his wife or newborn child again.

I vividly remember the events of that day. I can’t help but believe that seeing the incredible courage of officers that day is why, a decade later, I decided to become a police officer.

The events of that day changed the world forever. The greatest military the world has ever known began a war that, on paper, would last 20 years, but we now know will last the entirety of their lives in the minds of some that served.

In today’s hyper political world, it is popular to try to point out what is wrong with our country. But on this anniversary I choose to remember what is right … that we are a country full of Officer Christopher Amoroso’s; people that LOVE what is behind them MORE than they fear what is in front of them.

Submitted By A Reader