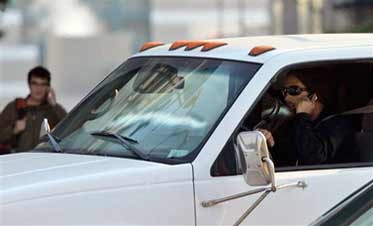 VENTURA, Calif. — The California Highway Patrol is gearing up to enforce California's new restrictions on cell phone use while driving, which will take effect Tuesday.

"It's been well-advertised and well-publicized," said CHP Officer Brandon Mumme, a spokesman at the Highway Patrol's Moorpark station. "It remains to be seen what's going to happen when July 1 rolls around."

Beginning Tuesday, the law will allow adult drivers, ages 18 and older, to converse on cell phones with hands-free devices only.

While they may still dial numbers by hand, they may not talk on a cell phone by holding it once the call is connected. Texting is not specifically prohibited, although law enforcement officials are urging drivers not to send text messages while behind the wheel, saying it is dangerous and distracting.

Drivers are reacting to the new law with mixed feelings.

"I hate when people talk on the phone when they're driving," said Deanne Paeper of Thousand Oaks. "I can't wait."

"It sucks, because I really don't talk on my cell phone and Bluetooth is so expensive," said Ojai resident Andrea Hoying, 23. But Hoying quickly added that she already owns a Bluetooth device and said the law may be good for people like her sister.

"My sister is the worst driver in the world, and she's always talking on her cell phone," Hoying said.

Camarillo resident Charlene Kelson, 73, said a friend of hers was paralyzed when a driver collided with her car as he was scrambling to pick up a dropped cell phone.

"Even hands-free is upsetting because if people get upset or emotional and get distracted, it could still cause an accident," Kelson said.

CHP Officer Mike Untalan at the Ventura CHP station said officers will enforce the new law because they know from experience that cell phone use is a major cause of traffic accidents. Drivers won't be able to escape punishment by hanging up when they see an officer, he cautioned.

"From a patrol point of view, it's easy to see it. And you have still violated the law if you hang up before you stop for an officer," Untalan said. "Enforcement is the only way people are going to be aware that we're taking it seriously."

Electronic signs on Highway 101 in the county will be lit up with a reminder to motorists that the new law will be in effect beginning Tuesday, but CHP officials in Ventura County said there are no plans to carry out a targeted campaign to catch offenders.

Antonio Fuentes, a 29-year-old driver from Ventura, said he hasn't bought a hands-free device yet but plans on doing so. He said it won't be hard to comply with the law.

"It's good for the most part because a lot of people don't pay attention." But, he said, "I don't think it affects me because I have a good attention span."

"Cell phones make driving less safe, so we should try to do something to improve the situation," said Conejo Valley motorist Paul Brockway, who has already bought a Bluetooth device.

Teen drivers under 18 will not be permitted to use a cell phone – not even with a hands-free device – for calling or texting while behind the wheel, except in an emergency to call 911 or summon other help.

The penalty for a first offense is $20. The fine is more than doubled for a second offense.

A group of 15- and 16-year-olds taking driver-education classes at the Thousand Oaks Teen Center said they were in favor of the new law and said they think it will make the roads safer.

Some admitted that it would be hard not to be able to text their friends when they're out in their cars.

Having grown up using cell phones and text messaging, others said, would make it difficult to prevent some teens from continuing to do so even when driving.

Deputy Jeff Oswald from the Thousand Oaks Police Department, the school resource officer assigned to Thousand Oaks High School, said it is going to be tough to get teens to obey the new law.

"They have rules at the school regarding cell phones, and kids break those rules on a daily basis," Oswald said.

A study released earlier this month by the Insurance Institute for Highway Safety said its research shows teenagers won't stop using their cell phones when driving even if it's a crime.

"Cell phone bans for teen drivers are difficult to enforce," said Anne McCartt, the institute's senior vice president for research and an author of the study. Most parents and teens believed police officers weren't looking for cell phone violations, she said.

The CHP says that won't be the case in Ventura County.

"We'll definitely be paying attention to it," Mumme said.

Mike Burgett, owner of B Safe Driving School on Moorpark Road in Thousand Oaks, welcomes the new law, saying anything that decreases distractions for teen drivers is a good thing.

"It's going to make the roads much safer," Burgett said, citing the state's experience with previous restrictions on young drivers. "The accident rate has dropped dramatically since they implemented the 'not driving with other passengers for a year' and changed the curfew to 11 o'clock. All these things help save lives."