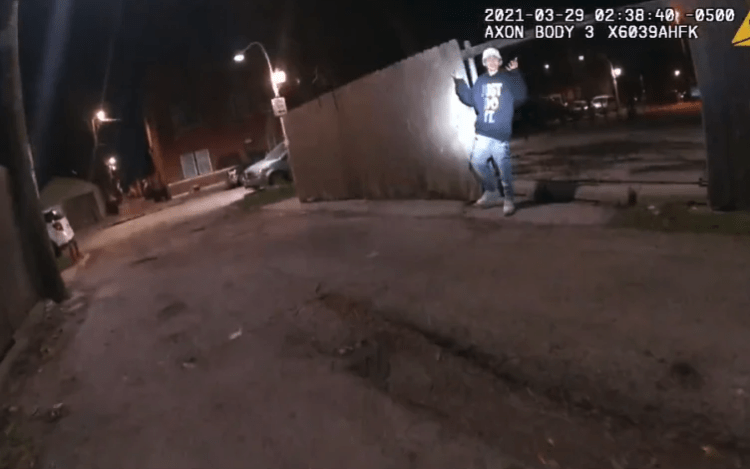 CHICAGO — The city of Chicago on Thursday released video of the fatal police shooting of Adam Toledo, 13. The Civilian Office of Police Accountability – Chicago’s police oversight agency investigating the shooting – released the videos two days after Toledo’s family was shown the footage and 17 days after the shooting itself, which took place in the early morning hours of March 29, NBC 5 reported.

Body-camera footage of the shooting was made public, along with multiple third-party surveillance videos and other materials related to the investigation, including ShotSpotter recordings and audio of 911 calls.

WARNING: The video below contains graphic content and may be disturbing to some viewers. The NBC 5 version is not showing the moment Adam Toledo is shot. The audio of the scene will continue to play as the video pauses.

The body camera video that shows the shooting begins with about 1 minute and 45 seconds of the officer driving to the scene in the Little Village neighborhood before exiting his vehicle and running down an alley.

“Police, stop. Stop right f***ing now,” the officer can be heard yelling as Toledo appears to pause near a fence bordering a parking lot at the end of the alley and turn toward the officer.

The officer can be heard yelling, “Hey show me your f***ing hands, drop it, drop it,” firing one shot as Toledo turns and puts his hands up, just under 20 seconds after the officer exited his vehicle. As Toledo turns, he’s illuminated by a flashing light, NBC 5 reported.

Toledo falls to the ground and the officer immediately moves toward him and calls for medical assistance, saying “shots fired by the police” as he requests an ambulance. The officer asks Toledo if he is alright and where he was shot.

“Stay with me. Stay with me,” the officer can be heard saying in the video.

Another officer arrives at the scene while the officer who fired the fatal shot begins chest compressions. Over the next several minutes, multiple officers are seen or heard continuing chest compressions as they wait for an ambulance to arrive.

About two-and-a-half minutes after the shooting, the body camera footage shows another officer shine a flashlight on a gun on the ground behind the fence near where Toledo was shot.

A surveillance video from across the parking lot, though recorded from a distance, appears to show Toledo make a tossing motion with his right hand behind the fence before turning to face the approaching officer, who then immediately fired the fatal shot.

Prosecutors said that Ruben Roman, 21, is seen on video firing the weapon that brought police to the Little Village neighborhood, according to the Associated Press.

Prosecutors say he and Toledo fled the scene together, with officers in pursuit. They say Roman was arrested as another officer chased Toledo. Roman was ordered held on $150,000 bond on charges of child endangerment and gun possession, Law Officer reported.

Mayor Lori Lightfoot called for a new foot pursuit policy to be implemented by CPD before the start of summer after Toledo’s death, Law Officer reported.