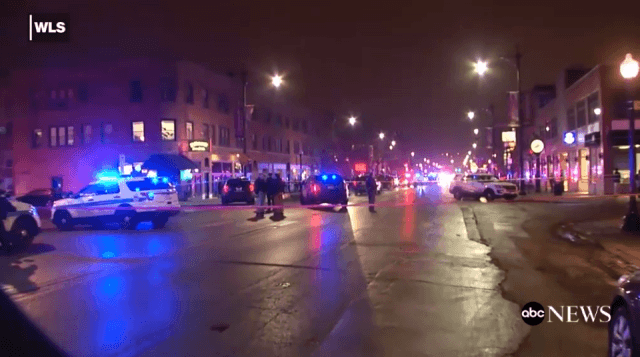 CHICAGO – A Chicago police officer was shot in the head during a gun battle with a bank robbery suspect as he attempted his getaway.

The 17-year veteran officer with the Chicago police department is apparently stabilized after the frenzied scene Tuesday night.

The injured Chicago officer, 46, has a skull fracture and blood on the brain, a hospital official said. His condition is listed as serious, but stable.

The “chaotic scene” began as a bank robbery in Des Plaines, a Chicago suburb, Chicago Police Superintendent Eddie Johnson told reporters. One robbery suspect was captured by Des Plaines Police Department, but a second one escaped, stole a car and headed toward Chicago, Johnson said, according to ABC News.

Officers were able to track his movements and Chicago police officers were waiting for the suspect when he exited the expressway, Johnson said.

Superintendent Eddie Johnson and Mayor Lori Lightfoot address the media at IL Masonic Hospital, where a Chicago Police Officer is being treated after being shot, while assisting Des Plaines Police and Illinois State Troopers after a bank robbery that occurred in Des Plaines, IL. pic.twitter.com/BUEFkc5YBp

Des Plaines police continued with the pursuit, which ended at a music store. The suspect and officers exchanged gunfire, and the suspect was shot and killed, according to Johnson.

Sadly, a 15-year-old bystander who was in the music store for a piano lesson at the time was shot in the arm and abdomen. The teen boy was hospitalized in stable condition, the superintendent said.

The injured Chicago officer, who was not identified, “has received over 100 awards from the department for his exemplary police work,” Johnson said.