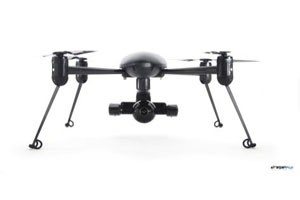 Portland, Ore. – The Saskatoon Royal Canadian Mounted Police (RCMP) successfully used a FLIR thermal camera attached to an unmanned aerial vehicle (UAV) to rescue a disoriented motorist who had wandered into a forest after crashing his car in rural Saskatchewan, May 9.

RCMP and local volunteer fire and rescue personnel responded to a report of a single vehicle rollover accident just after midnight near the town of St. Denis, 40 km east of Saskatoon. However, they find no victims at the scene. A ground sweep and aerial search by helicopter with night vision and a search light failed to locate any survivors.

Two hours later, RCMP received a 911 call from the driver, a 25-year-old man with an apparent head injury. He was lost and wearing only a tee-shirt and pants in near freezing temperatures.

Using the GPS coordinates of the man’s cell phone, rescuers continued the search by helicopter two miles from the crash scene, with no success.
RCMP officials then deployed a remote-controlled Dragan Flyer X4-ES UAV with a FLIR Tau infrared camera core and soon picked up the heat signature of the driver. Rescuers found him curled up near a snow bank, unresponsive and hypothermic. They transported the man to a hospital in Saskatoon for treatment.

“Without the UAV and FLIR, searchers would not have been able to locate the driver until daylight,” the RCMP report said.

To view thermal footage of the night rescue, visit http://www.youtube.com/watch?v=apEnf-0Rzb4.