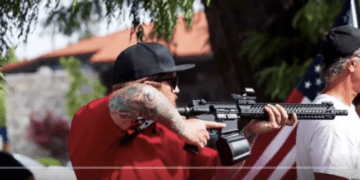 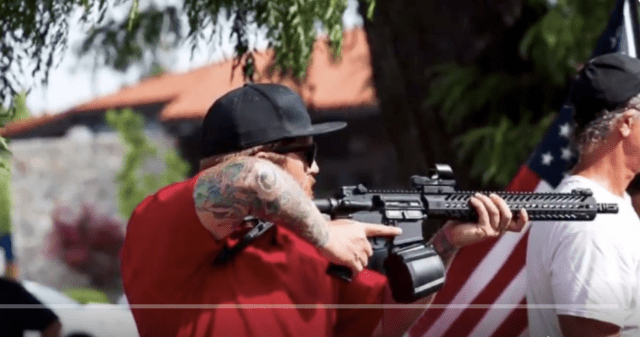 Jacob Daniel Bracken pulls a weapon on advancing protesters. He was charged with felony assault. (Twitter)

UPLAND, Calif. — A Southern California man captured on camera pointing a loaded AR-15 rifle at a group of advancing protesters has been arrested and charged with assault with a deadly weapon.

Even though Bracken did not fire the rifle and no one was injured, Upland Police Chief Darren Goodman explained the assault charge: “You point the weapon at someone with the intent to intimidate and the weapon being loaded itself.”

One video shared by a KNBC reporter at the scene showed Bracken take the AR-15 out of a pickup truck, yelling for the crowd to “back the f— up.”

Goodman said they have videos as well as still photos that “conclusively showed” Bracken pointing the weapon at some point.

“On June 1, 2020, the Upland Police Department was monitoring a peaceful protest in their city. The police officers were notified by protestors of a potentially life-threatening incident. The officers immediately investigated the incident. Bracken was arrested by the Upland Police Department, and the case was forwarded to our office for filing consideration,” the district attorney’s office said.

“This incident was captured on video by the peaceful protestors who cooperated with law enforcement, which is encouraging to the community. Thankfully, through the restraint of the protestors and the swift investigation by the Upland Police Department, a potential tragedy may have been avoided,” the office said.

Videos taken from the scene showed a large crowd of protesters on one side of the street, and a smaller group of men on the other holding American flags. At one point, a man with a flag crossed the street and appeared to engage with the protesters before the group advanced toward him and the lawn of a residential house.

Once the protesters approached the property, Bracken, standing in the home’s driveway, is seen pulling out the AR-15. Bracken does not live at the house in the footage, according to KNBC.

A unnamed, middle aged man at the property who witnessed the incident was asked to provide his perspective of the encounter:

“We were standing watching the Black Lives Matter people. There’s about seven of us, and there is about, uh, I don’t know, 200 of them. … My brother was somewhere, walking across the street to engage with somebody, not in a mean manner. Anyway, the entire crowd essentially rushed us. (There was) a lot of madness, so I turned around, and he (Bracken) had a weapon in his hand.”

The Alexvnews reporter asked the witness, “So you guys were kind of fearing for your life?”

“Of course, ya know, I mean seriously. Look at this situation,” the man replied. “There are 200 against seven people here.” (See interview below with man in green shirt.)

Explanation from a friend of the man who pulled out the gun. The suspect does NOT live at that location. pic.twitter.com/FZ2Kl4GUZQ

A protester who witnessed the incident said he felt “nothing but hate and racism.”

“We’re just here to peacefully protest and you don’t want to take anything further. You don’t know what these people are capable of,” the man, with his face covered by a black bandana, said.

Other videos showed police officers in the middle of the street separating the two groups. Lingering protesters are later seen shaking hands and hugging officers as the crowd dispersed, Fox News reported.

#Upland– Jacob Bracken the man accused of pulling an assault rifle on protestors in #Upland on Monday has been charged with two counts of assault with a deadly weapon. I sat down with @UplandPD_Chief to get his reaction to the charges. #NBCLA pic.twitter.com/vmwMFmwppW

“There’s no attempt to make an example. The example is simply we follow the rule of law and that applies to everybody. What this person did was unacceptable,” Goodman, said.

“I would hope people can accept differences of opinion and different views without taking a violent position. Just like I hope the protesters can learn to continue to be peaceful in their protests and not destroy property,” the chief said.

The Upland Police Department said that after the 6 p.m. curfew passed, while some protesters left, others stayed and refused to comply with the command to disperse. Several officers were pushed by protesters, and rocks and bottles were thrown at officers. Officers deployed pepper balls and two sting balls to push the crowd back before it ultimately dispersed without other arrests.

In March the Los Angeles County district attorney apologized after her husband was filmed pointing a gun at about 50 Black Lives Matter demonstrators and threatening to shoot them for showing up to their Los Angeles area home.

A tearful Jackie Lacey said during a press conference hours after the incident that the gathering of protesters at her home awakened her and her husband, David, and he reacted out of fear but was “profoundly sorry” for brandishing a gun, Law Officer reported.

Although the circumstances vary, an “apology” seemed to suffice in Lacey’s circumstances, but not so much with Bracken.

“Under California law, a misdemeanor ‘brandishing’ section—Penal Code 417—is often used as a final disposition when a suspect simply displays a firearm in a threatening manner, but does not fire it,” said Jim McNeff, managing editor at Law Officer and retired Southern California police lieutenant.

“However, the defense in this case will likely be self-defense,” he said. “Absent the environment of this encounter, I doubt criminal charges would be filed in most jurisdictions. Furthermore, what kind of violence was averted by pulling the firearm? I’m sure that issue will be raised if this case goes to trial. The strike against the counter-protesters is that one person from their party apparently initiated contact before the protesters aggressively approached.”