“The brazenness of criminals in today’s society is just overwhelming to me," Chief Mark Kling said. 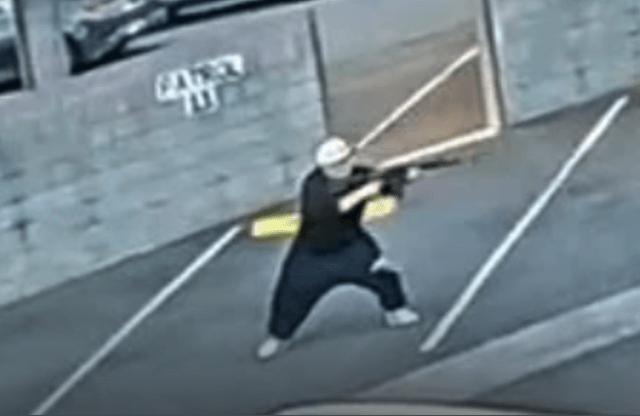 A suspect followed an officer into a secure area and pulled a rifle on him. (Screenshot KTLA)

RIALTO, Calif. – A male suspect armed with an assault-style rifle was shot and wounded after law enforcement officials said he entered a secure area of a Southern California police department on Monday afternoon.

The shooting occurred at about 4:30 p.m. toward the rear of the Rialto Police Department, located at 128 N. Willow Ave. Officials said an officer pulled into a secure parking lot at the station and was unaware that a man in a black Dodge Charger had followed him into the lot, KTLA reported.

The shooting was captured on video, which shows the suspect, armed with a rifle in hand, run up from the rear of the driver side of the patrol unit. The officer is sitting in the vehicle conversing with another person who just approached on foot from the passenger side.

When the officer became aware of the suspect, he exited his vehicle, and the man retreated. However, as he backed away he also turned and pointed the rifle at the officer. The officer opened fire and stopped the man from any further action.

Chief Mark Kling of the Rialto Police Department said the officer opened fire and struck the suspect since he feared his life was in danger.

Following the shooting, additional officers can be seen in the video responding from within the station with weapons drawn.

Officers provided emergency medical care to the suspect, who was subsequently transported to a local hospital. He is reportedly in stable condition.

No officers were injured during the bizarre encounter.

Chief Kling said the San Bernardino County Sheriff’s Department is taking the lead on the investigation per protocol. As a result, he said he cannot confirm the type of weapon possessed by the suspect.

Officials did not provide the identity of the suspect, but said he is a resident of San Bernardino. Due to his medical condition he has not yet been available for an interview, police said, KTLA reported.

“The brazenness of criminals in today’s society is just overwhelming to me,” Chief Kling said. “I’ve been doing this for 37 years and in 37 years, I would’ve never ever thought that somebody would’ve come in, armed with some type of a weapon and assaulted our police officers. And I think what is so concerning is it’s just not here in the City of Rialto. It’s happening everywhere.”