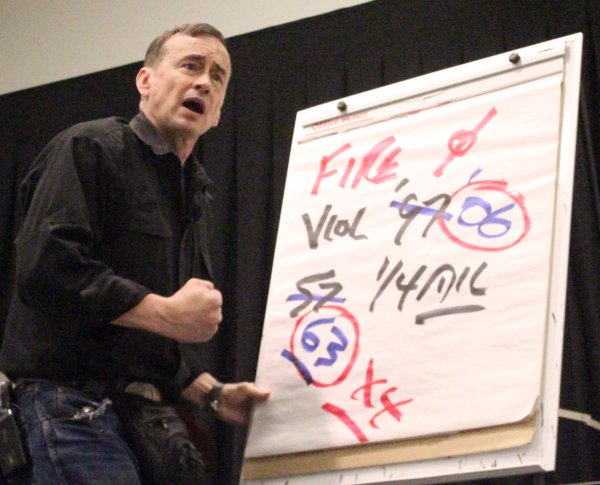 “This is the law. The purpose of fighting is to win. There is no possible victory in defense. The sword is more important than the shield, and skill is more important than either. The final weapon is the brain, all else is supplemental.” –John Steinbeck, from his last and unfinished work, The Acts of King Arthur and His Noble Knights.

This quote has become quite popular lately, yet some of our present day warriors question its validity. They say, “It’s old and no longer relevant.” Or: “That brain thing is way overrated. Modern weapons don’t require much thought to use effectively.” Not to mention the somewhat prevalent attitude of: “It might have been true when we only fought with swords, but now I have my mega-caliber-thunder-blaster, which is loaded with kryptonite tipped bullets. It makes me invincible!”

If you understand Mr. Steinbeck’s logic, you probably don’t need to read any further. However, if you think that John Steinbeck is just some old dead guy, and that his classic quote doesn’t apply anymore, read on. I’m not going to change your mind; you are going to do that all by yourself. All I’m going to do is give you food for thought.

The bottom line: Mr. Steinbeck’s quote wasn’t only applicable the first time two humans violently clashed. It’s just as applicable today, and it will be as long as interpersonal human conflicts exist.

Pick the largest retail store in your area. This will be the venue for our test of Steinbeck’s quote. We’ll bar the windows and weld the doors closed, so there will be no choice but to engage your opponent.

You will start at the northwest corner of your chosen retail store, carrying your off-duty firearm and whatever spare ammunition you normally carry. (If you stake your life on it normally, then it’s good enough for our test.)

At the southeast corner of the store, there will be two opponents. However, you only have to fight one, and you’ll even get to choose which one will be your opponent. The rules of the game are easy. We’re going to lower the lights to a minimum, and whichever opponent you choose, he or she will be coming after you to kill you. Sooner or later, you will meet somewhere within the store, and you’ll be forced to engage your opponent. (In all reality, you’ve played most of the elements of the game during previous building searches.)

Let’s look at your potential opponents.

Opponent No. 1 one will be armed with the .40 or .45 semi-auto pistol of his choosing, fully customized to fit him (regardless of cost, he will get the best that money can buy). It will have night sights, a rail mounted flashlight and a laser sight. Plus, it will be loaded with the nastiest, flesh-eating man-stopper hollow points known to man, and Opponent No. 1 will be equipped with as many spare magazines as he wishes to carry. He will also have a state-of-the-art switchblade knife and the backup handgun of his choosing.

Opponent No. 2 will have a 1970s-vintage, two-inch, .38 caliber, five-shot revolver. However, it will be loaded with only three rounds, of .38 +P+ hollow point ammunition. He will have no additional ammo or other weapons.

Now for the big question, which of the two opponents do you choose to face? As Master Po frequently encouraged young Kwai Chang Caine, “Choose wisely, Grasshopper.”

Opponent No. 1 is Uncle Bud. Uncle Bud spends most of his free time watching NASCAR and drinking beer. He works at a vehicle assembly plant, screwing on lug nuts as his primary job. Uncle Bud has never had any firearms training, other than plinking behind the barn. He can change a magazine in just under ten seconds. On a good day, at a distance of 12 feet, he can hit a beer can six out of ten times. If you face Uncle Bud, he will be equipped with the high-tech semi-auto with unlimited magazines.

Opponent No. 2 spends his free time competing in IDPA and IPSC matches. He’s currently employed as a SWAT team leader and has performed hundreds of drug raids and other high-risk deployments. Oh, I almost forgot, before joining the police department, he spent ten years as a Navy SEAL.

Does knowing who is behind the guns change your mind about which opponent you want to face? And what’s the deciding factor? Is it the opponent’s highly trained brain that suddenly makes a lesser firearm far more dangerous than its high-tech sibling? And if so, does that not prove that ol’ John Steinbeck was right–not only when he wrote that classic quote, but today as well?

Lt. Col. Dave Grossman wrote what is probably the best modern-day equivalent of John Steinbeck’s quote. It’s in the forward to Ken Murray’s highly acclaimed book, Training at The Speed of Life, Col. Grossman writes: “Amateurs talk about hardware, or equipment. Professionals talk about software, or training and mental readiness.”

So if you’ve ever questioned Mr. Steinbeck’s philosophy, give this article some time to sink in. When you make attending quality training a higher priority than purchasing high-tech toys, you’ll soon realize that your brain is your primary and final weapon, and skill is far more important than any high-tech gadget or gun.

Share and speak up for justice, law & order...
Tags: exclusiveTraining