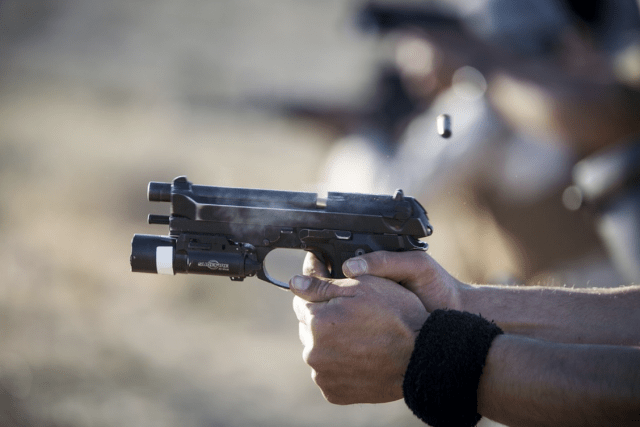 BIRMINGHAM, Ala. – A Birmingham police officer staged his own shooting last week in a grab for “stolen valor,” leaving the department “polarized and hanging its head low,” the police chief said Thursday.

The officer was identified as Keith Buchanan, according to NBC News. He graduated from the police academy in 2012.

Buchanan was relieved of all duties and is likely to face charges of criminal mischief, false reporting and discharging a firearm within the city limits, Chief Patrick Smith said at a news conference.

The upset chief had to pause several times during the news conference, appearing to check his emotions.

Citing other officers for their legitimate heroism, Smith said Buchanan’s alleged action “is a slap in the face to them and the efforts that they have put out.”

“I’m here to talk about stolen valor, stolen honor and an attempt to stage a shooting that has left this department polarized and hanging its head low in disbelief.”

The tale told by Smith is rather remarkable. He said Buchanan was patrolling near railroad tracks along the Birmingham-Tarrant border early on July 21 when the officer radioed a call for help, with gunshots audible in the background.

Fellow officers searched for Buchanan for more than half an hour before Tarrant officers found him on the ground beside the tracks, “appearing to be unconscious and holding his gun,” Smith said. Buchanan’s police car was found nearby with a bullet hole through the front window, he said.

Buchanan was found to be uninjured when he was taken to University of Alabama-Birmingham Hospital, NBC affiliate WVTM of Birmingham reported at the time.

“I’m here to talk about stolen valor, stolen honor and an attempt to stage a shooting that has left this department polarized and hanging its head low in disbelief,” Smith said Thursday.

“Our investigation has concluded that this entire event was a hoax,” he said. “The radio call, the shots fired, the help call, lying injured on the tracks, the damage to the police car — all a hoax.

“We found nothing to support the officer’s account of this incident,” Smith said. “I can’t say it enough: We will always be in relentless pursuit of our suspects, even when that suspect is one of our own.”

Smith said Buchanan “did a lot on that night to present a false image of heroism” and had offered no explanation.

“He endangered the lives of the community by discharging his firearm and also other officers as they responded from all over the city to be at his side,” Smith said.

“When we have an act like this that is pretty stupid and dumb, it makes me mad,” Woodfin told WVTM.

Buchanan hasn’t been arrested, and no attorney who could comment could immediately be identified. Smith said police are consulting with prosecutors to seek an arrest warrant.

Birmingham Police Chief gets vote of ‘no confidence’