Brinton used the stolen bag on his return trip to D.C. and during an October excursion to Europe. 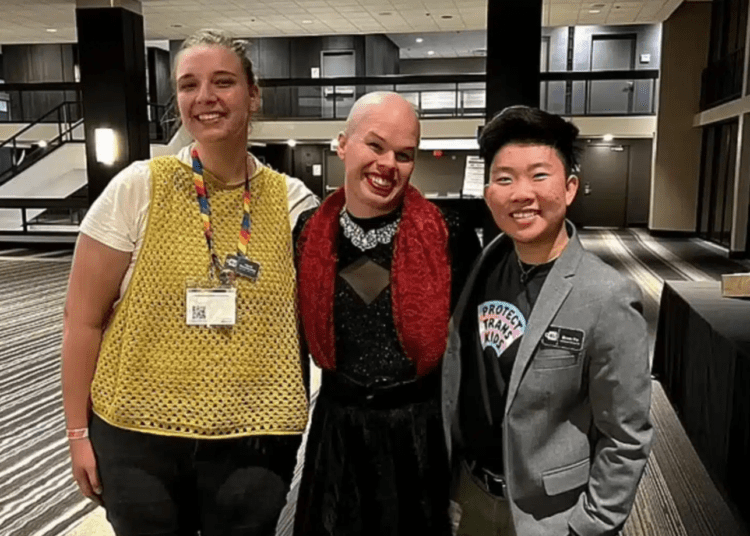 Sam Brinton, center, pictured at the Out for Undergrad Engineering Conference in St. Paul, according to the Daily Mail. (Image via Alpha News)

ST. PAUL, Minn. – The Biden administration’s Sam Brinton was in St. Paul for an LGBTQ engineering conference on Sept. 16 when he allegedly stole a woman’s luggage, according to new reports.

Alpha News broke the story Monday that Brinton, a deputy assistant secretary in the Department of Energy’s Office of Spent Fuel and Waste Disposition, was charged with felony theft for allegedly snatching another traveler’s luggage from a baggage carousel at the Minneapolis-St. Paul International Airport.

It was unclear what the D.C. bureaucrat was doing in the Twin Cities, but a new report from the Daily Mail says he was in town for the Out for Undergrad Engineering Conference at the InterContinental St. Paul Riverfront hotel.

A criminal complaint filed against Brinton says he was spotted at the hotel with the stolen luggage. The Daily Mail released a photo of Brinton posing with conference attendees.

When Brinton arrived in St. Paul for the conference, he allegedly went to baggage claim and stole a woman’s blue Vera Bradley roller bag, ripped the luggage tag from the bag, and then left the area at a “quick pace.”

He didn’t check a bag and therefore had no reason to stop at baggage claim in the first place, according to the complaint.

Brinton used the stolen bag on his return trip to D.C. and during an October excursion to Europe, the complaint says.

Brinton initially denied taking someone else’s luggage but later told police that he was tired and thought the bag was his, the charges say.

Brinton is scheduled to make his first court appearance on Dec. 19 in Hennepin County. In a court document filed Tuesday, Brinton’s attorneys asked for a remote hearing, citing the financial and logistical issues of traveling between D.C. and Minneapolis. Brinton earns a salary of $178,000, according to The National Pulse.

Update: In a new court filing, Sam Brinton's attorneys confirm he is on leave and request a remote hearing, citing financial and logistical concerns. https://t.co/g14idVpgYZ pic.twitter.com/bWosGuPVoP

Department of Energy officials have confirmed that Brinton is on leave but declined to comment further. Brinton and his attorneys have not talked to any media about the charges.

Brinton’s employment in the Department of Energy was celebrated earlier this year because of his status as one of the first “openly genderfluid individuals in federal government leadership.”