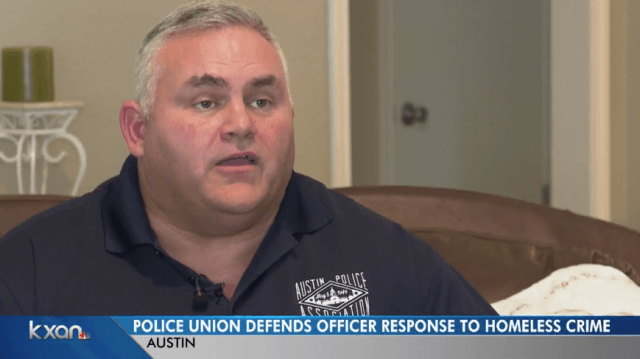 AUSTIN — Austin Mayor Steve Adler has come under fire by the Austin Police Association after he called on the public to share the names and badge numbers of any officer not arresting or ticketing people who are creating safety hazards.

The comments came at a town hall meeting on Tuesday during a discussion on homelessness within the city, KXAN reported.

“Nothing that the council did takes away from the police the ability to arrest or ticket people that are breaking the law. If anybody is hearing anything otherwise than that, then the police chief has asked to be informed,” Mayor Adler said on Tuesday. “If there is a police officer out there saying that, I will appreciate you getting his badge number and give it to me or giving it to the chief because that is not acceptable.”

Austin residents have told Mayor Adler and other city council members about complaints made to APD regarding different violations they see happening within their own communities. But police officers have relayed that they cannot make an arrest or issue a ticket because they didn’t witness the event. Moreover, most complaints were related to violations committed by those experiencing homelessness.

According to APA president Ken Casaday, there are state laws, such as urinating or defecating in public, that can’t be enforced unless physically witnessed by an officer.

“We enforce the laws, but we don’t make the laws or the ordinances. That’s the city council and city management’s responsibility,” Casaday said. “These officers have had their hands tied behind their back and that’s why you are seeing such a reaction from the community.”

“The police officers are what has made this one of the greatest cities in America,” Casaday said. “The Mayor is way out of his lane in saying that. He was very angry and upset when he said that and he’s not used to the public pushing back on him and I think that was just him overreacting to their demands.”

Adler said he meant no disrespect and was only echoing the call of APD Police Chief Brian Manley.

At a different forum earlier this year, Adler said the Chief was asked a similar question about proper police enforcement. Adler said Chief Manley agreed: he wanted to know which officers were failing to enforce public safety code violations.

“The Chief would like to know and I would like to know, too,” Adler told KXAN. “I want to make sure that police officers have the ability and authority to be able to arrest and ticket and act when they see our laws being violated and he’s assured me that they have that ability.”

Mayor Adler said he is also defending his comments about asking for names and badge numbers because he is confident all APD officers are doing their jobs properly.

“I have immense respect for the hard working men and women on our police force,” Mayor Adler said. “We want our police to act if they see a public safety risk happening or a public health hazard happening.”

Mayor Adler said he is working with Police Chief Brian Manley to make sure officers have the right tools to address the needs of the community and those experiencing homelessness.

The mayor said the next step is for the city council to list the places where people will not be able to camp, sit and lie. That announcement will come in two weeks.

Assault on the Street

Bob Woody, a well-known sixth street business owner, said he was attacked on Thursday. He recognized his assailant as someone who frequents Sixth Street; Woody labeled the woman “chronically homeless.”

After calling APD bicycle police officers over, Woody said the officers informed him that they could not do anything about the assault.

“She just literally punched me,” Woody said. “I don’t assault anybody. If I had, I had been in jail. She assaulted me and she’s free.”

Casaday said this is prime example of an offense that cannot be enforced unless witnessed by law enforcement. Deemed a “simple assault,” it doesn’t matter if a person said it hurt or if there were additional witnesses; if police didn’t see it, not much can be done right away.

There is an exception if there is a weapon involved or if it is domestic violence.

Casaday said police should still take a report, which will go to a detective who can then file a warrant, if needed.

“If a citizen has a complaint regarding any service they receive from an Austin Police Officer, they can inquire with that officer or request a supervisor respond to the scene. If they are still not satisfied, there are processes in place whereby they can file a formal complaint.

“Regarding many of the incidents discussed at the forum, it is important to note that the officer must witness the offense take place, or have demonstrable evidence indicating the subject committed the offense, to have legal authority to act.

“The changes to these ordinances did not impact our ability to take action when the underlying conduct is hazardous, dangerous, or obstructing the passageway. They also did not impact our ability to enforce conduct against the laws contained in the Texas Penal Code. If a citizen believes an officer is saying otherwise, it is important for us to know so we can clarify the issue with that officer and ensure we are putting out accurate information.”