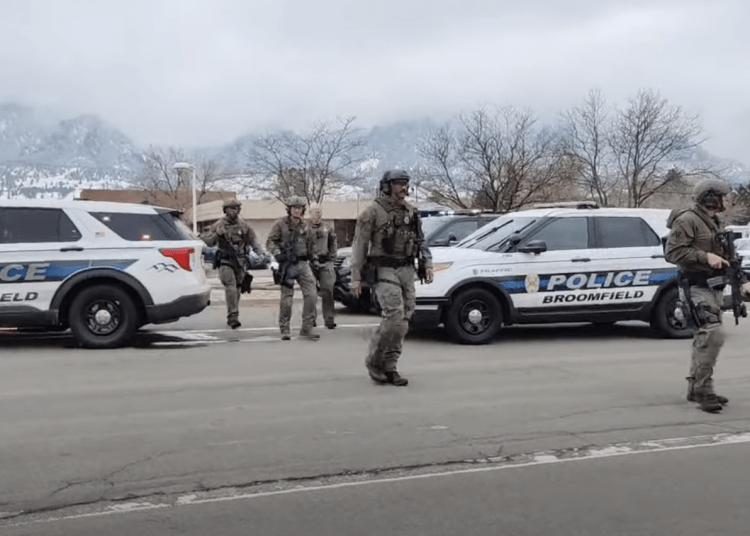 UPDATE: The death tally has reached 10, including Officer Eric Talley, 51, who was reportedly the first Boulder police officer to arrive on scene. Read more.

BOULDER, Colo. — At least six people are dead — including one police officer — after a gunman opened fire at a Boulder, Colorado supermarket Monday, according to local reports.

Law enforcement sources told Denver7 that at least six people were killed in the shooting at a Kings Soopers store — and that the gunman opened fire on officers when they arrived.

At least one of those killed was an officer, and two other officers were wounded, law enforcement sources told FOX31.

Local police said on Twitter they were responding to a report of an “active shooter” at around 2:30 p.m. local time, but have not confirmed the death toll.

“He didn’t say s–t,” one eyewitness told the Denver Post about the gunman. “He just came in and started shooting.”

Dramatic live video posted on YouTube showed police escorting a shirtless, bloodied man in handcuffs away from the store and into an ambulance, but it was not clear if he was a suspect or a victim.

The livestream also showed several people lying on the ground outside the store, and shots could be heard in the background at one point.

“I was sitting right outside in the parking lot. I heard the first shots go off,” a man says in the footage.

“I come around the corner and there’s people laying on the ground. This is no joke guys.”

A man who had just left the store, Dean Schiller, said he heard gunshots and saw three people laying face down, two in the parking lot and one in the doorway — and “couldn’t tell if they were breathing.”

Another man told CBS News that his son-in-law and granddaughters were in the store when the shots broke out, and that they hid inside a closet.

“They walked into the pharmacy for him to get a COVID-19 shot and the shooter came in, shot the woman in front of them,” he said. “They hid, ran upstairs… They were hiding in a coat closet for the last hour.”

He said police later came in “through the roof” and got them to safety, New York Post reported.

In the livestream, a SWAT team was also seen suiting up outside the store, as officers stood behind police vehicles for cover.

Police were then seen approaching the store with shields.

“As we were waiting on the pizza and we started hearing gunshots,” witness Daniel Douglas told WDVR-TV. “It sounded like someone was breaking glass at first. We started screaming and hit the ground.”

“My nerves are so racked right now,” he said. “I’m having a hard time talking.”

One witness reported a person wearing tactical gear and holding an “AR-15 style weapon” at the scene, the station reported.