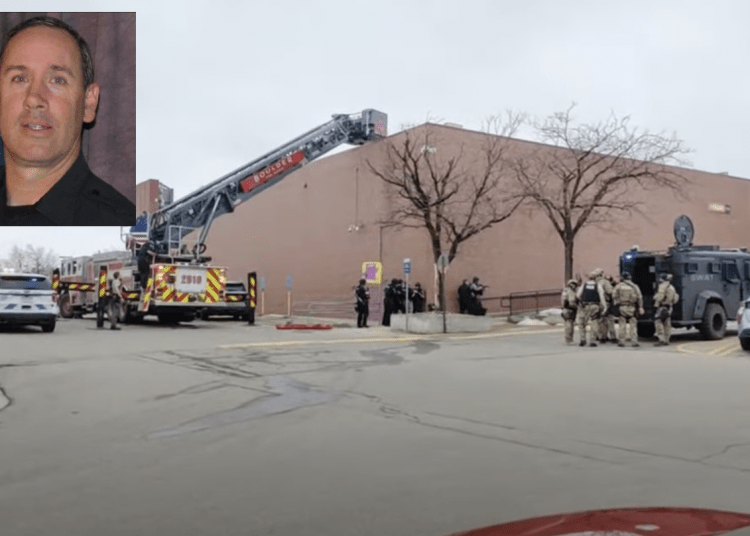 Officer Eric Talley was among 10 people killed at the Colorado supermarket on Monday. (YouTube)

BOULDER, Colo. — Ten people were killed, including a veteran police officer, during a mass shooting Monday inside a grocery store in Boulder, Colo., authorities said at a late news conference.

The officer was identified as Eric Talley, 51, who served on the force since 2010. He was the first officer at King Soopers, the crime scene, after the shooting occurred at about 2:30 p.m. His actions were called heroic.

Talley was the father of seven, his youngest seven years old, his father told the Denver Channel.

“He loved his kids and his family more than anything,” his father said.

Identities of the other nine victims were not disclosed as police were still notifying their family members, FOX reported.

The suspect, who was not identified, is receiving medical treatment. Officers had escorted a shirtless man with blood running down his leg out of the store in handcuffs but authorities would not say if he was the suspect.

Authorities said that they are working to compile evidence. Several state and county law enforcement agencies were assisting Boulder police as well as the Bureau of Alcohol, Tobacco, Firearms and Explosives.

Witnesses told FOX 31 Denver that they heard pops that sounded similar to fireworks and saw a man brandishing an “AR-15 style weapon” and wearing what looked like tactical gear.

KCNC-TV reported that family members were in line for the COVID-19 vaccine inside the store’s pharmacy at the time of the shooting.

David tells me he was getting sushi at the King Soopers when he heard gun shots. He ran and hid behind a urinal in the closest bathroom. This is the painful moments he’s describing as he hid and heard gunshots. #bouldershooting @KDVR @channel2kwgn pic.twitter.com/lhlF58T78X

A witness told The Associated Press he had just left the supermarket when he heard gunshots and saw three people lying face down, two in the parking lot and one near the doorway. He said he “couldn’t tell if they were breathing.”

Video posted on YouTube showed one person on the floor inside the store and two more outside on the ground. What sounds like two gunshots are also heard at the beginning of the video.

Authorities could also be seen leading at least one other person out of the store and pressing him against the exterior wall of the building before walking away with him. He did not appear to be handcuffed.

U.S. Rep. Lauren Boebert, R-Colo. said she was praying for “employees, first responders & others affected by the shooting in Boulder.”

Gov. Jared Polis, a Democrat, said his “heart is breaking” over the incident.

“My heart is breaking as we watch this unspeakable event unfold in our Boulder community,” he said. “We are making every public safety resource available to assist the Boulder County Sheriff’s Department as they work to secure the store. I’m incredibly grateful to the brave men and women who have responded to the scene to help the victims of this senseless tragedy.”