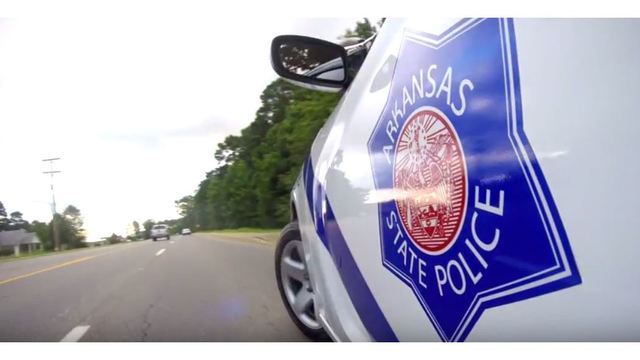 The below video shows a Arkansas State Trooper in a police pursuit at speeds up to 130 mph.

The April 10th chase ended in an attempted PIT Maneuver that killed the suspect, Justin Battenfield, and sent Trooper Michael Ellis’s patrol car 15 feet in the air before landing.

According to 40/29 News, the pursuit started after a U.S. Forest Service officer tried to stop a truck for running a stoplight on the shoulder of Hwy. 71 in the city around 6:30 in the morning .

State Police dash camera video showed troopers getting involved in the pursuit when the chase entered Sebastian County and was heading back towards Fort Smith. The chase had been underway for approximately 17 minutes when troopers took the lead. In total, the pursuit lasted approximately 30 minutes.

Dash camera video shows the patrol car colliding with the truck at speeds of more than 100 m.p.h.. Both vehicles crashed, as the truck rolled it catapulted Trooper Ellis’s patrol car through the air, where it snapped a utility pole. Both vehicles came to rest upside down.

Trooper Ellis was treated and released from the hospital and is home recovering from his injuries.