Arkansas Agency Removes Officer Memorial From Their Front Lawn, Scared That Rioters Will Destroy It 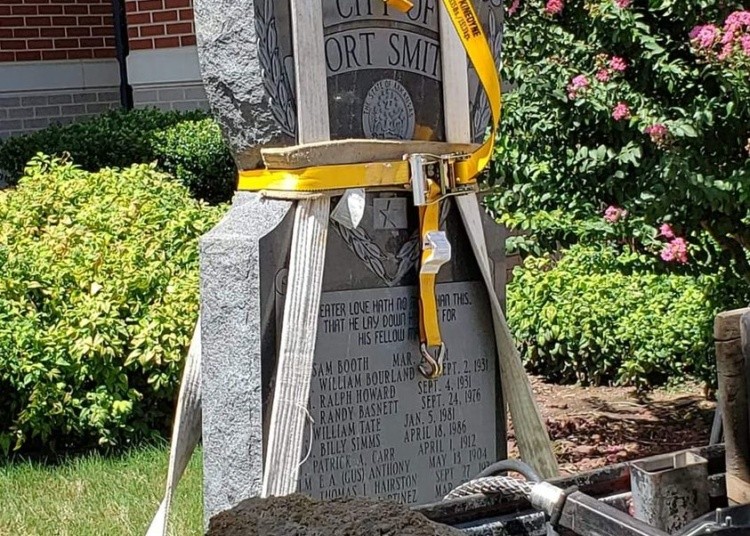 News Channel 3 report that the memorial was removed by the city directors and placed behind a gated area for protection.

Chris Raynor helped remove the Fort Smith memorial and says it was extremely difficult to do.

“It’s emotional because you know moving something that’s been there for years, it’s part of history those people have nothing to do with what’s going on in America they should be in their final resting place you know and just let it be, it’s a shame that we’ve had to come to that nowadays I mean it’s blood sweat and tears are in that monument from those people, the emotion is hard to express,” Raynor said.

The movement of the memorial drew sharp outrage from the public and former officers and it has been reported that none of the family members of the fallen were consulted prior to the decision.

One commentator chastised the agency that if they couldn’t protect the memorial right in front of their police building what could they protect?

Another said “Breaks my heart….these Policemen gave the Ultimate Sacrifice, this is horrible.”

One former employee said “This is OUTRAGEOUS !!!!! Why in the Hell would this be allowed. I worked for FSPD several years and some of the finest officers I had the pleasure of working with are unfortunately on this Memorial! And, that statue was positioned right where it Needed to be.”
We see this move as cowardly and outrageous. Never give in to the mob.
And since these fallen heroes are no longer honored on the same property they defended, we will honor them below.
Officer Daniel Martinez
Officer Daniel Martinez was shot and killed while helping a mother retrieve her child from a residence. Officer Martinez had responded to a call to help a mother get her child from a residence where she had a run in with her ex-boyfriend earlier in the day. The ex-boyfriend had been arrested and she had returned to pick up her child. She met the officer in the parking lot and they went to the front door and the brother of the man arrested earlier answered and told them to wait a minute, then shut the door. He returned with a 9 mm handgun and shot the police officer in the head, then shot the mother in the back, shoulder, and elbow as she fled. Officer Martinez was taken to Sparks Regional Medical Center, where he was pronounced dead.
Officer Billy Simms
Patrolman Simms was struck and killed by a vehicle while crossing Rogers Avenue near Barling at 2055 hours. He was on patrol when he stopped to assist a disabled motorist. He had activated his emergency lights and walked across the street to the car. When he finished with the motorist he was walking back to his patrol car when a car struck him. He was knocked into the path of another car and was killed instantly.
Detective Ray Tate
Detective Tate was shot and killed after being abducted along with three crime victims. A woman and a co-worker had gone to the police station to report that the woman’s husband was missing. After taking the report Detective Tate followed the two back to her residence. He advised dispatch of his arrival and then made no further contact.
Officer Randy Basnett
Patrolman Randy Basnett was shot and killed when he confronted a double-murder suspect. Patrolman Basnett was in the parking lot of a service station when the suspect pulled into the parking lot as well. He had recognized the suspect’s car from a bulletin provided to the police department earlier in the day. When Patrolman Basnett asked for identification the suspect reached inside of his vehicle, produced a .25 caliber handgun, and shot Patrolman Basnett in the chest. Patrolman Basnett returned fire at the fleeing suspect. Two shots struck the suspect and four shots struck the suspect’s car. The shooting occurred across the street from an Arkansas State Police barracks. Several troopers who heard the shots pursued the suspect and assisted other Fort Smith officers in arresting the suspect a short distance away. The suspect was sentenced to death and executed on June 18, 1990.
Officer Thomas Hairston
Patrolman Thomas Hairston suffered a fatal heart attack shortly after being involved in a shooting of a suspect.
Captain William Bourland & Officer Ralph Howard
Captain Bourland and Patrolman Ralph Howard were shot and killed during a shootout of several armed robbery suspects.
Detective Sam Booth
Detective Booth was shot and killed while transporting two men to jail.
Detective Patrick Carr
Detective Patrick Carr was shot and killed when he assisted other officers in the capture of an escaped prisoner.
Officer Ernest Anthony
Patrolman Ernest Anthony was struck and killed by a train while patrolling the local rail yard.
Chief Michael Baer
Chief of Police Michael Baer was shot and killed as he and a sheriff’s deputy searched for a gang of horse thieves that had been active in the Fort Smith area.

The two officers were riding along the Little Rock Road (modern-day Highway 22), approximately 10 miles east of Fort Smith, when they encountered a group of three men. Before any words were exchanged the men opened fire on the officers, who returned fire.