Violence Also Erupted Against Law Enforcement During The Protest 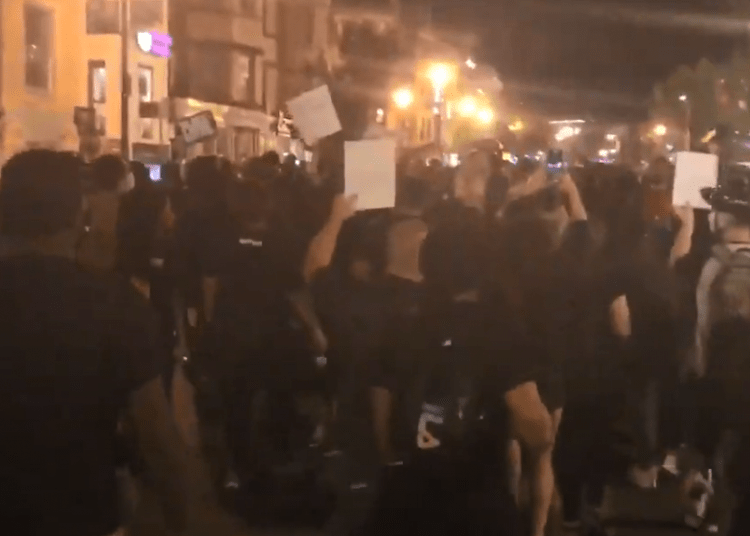 Protesters marched through the streets of Washington D.C. late Saturday chanting “burn it down.”

The group, consisting of Black Lives Matter and Antifa appeared to stay far away from the thousands of military troops stationed around the United States Capitol, which remained peaceful since January 6th.

BLACK LIVES MATTER LEADER SAYS THEY WILL BURN DOWN THE SYSTEM

Saturday’s events began with a 2 p.m. gathering by the “DC Queer and Trans Black History Month March and Rally” which was organized by the Total Liberation Collective and the Palm Collective.

Later in the evening, Black Lives Matter protesters marched north from Dupont Circle and then into business districts that included some neighborhoods.

“Burn it down,” they chant.

An officer swats away one of the flashlights, leading to brief clashes as police push forward into the crowd in front of outdoor diners here in DC #DC #DCProtests #WashingtonDC pic.twitter.com/UuA76fH5X4

DC Police are forming lines around the outdoor diners to separate them from the protesters marching past #DC #DCProtests #WashingtonDC pic.twitter.com/g4uIrc39P9

Fox News reports that some Antifa protesters were mixed in the crowd, as a red and black “Antifascist Action” flag could be seen being carried by a group of protesters clad in black.

The protesters briefly paused in front of a row of restaurants where some protesters scuffled with police officers, independent journalist Brendan Gutenschwager reports.

Chants of “Black lives, they matter here” and “If we don’t get it, burn it down” rang out from the crowd.