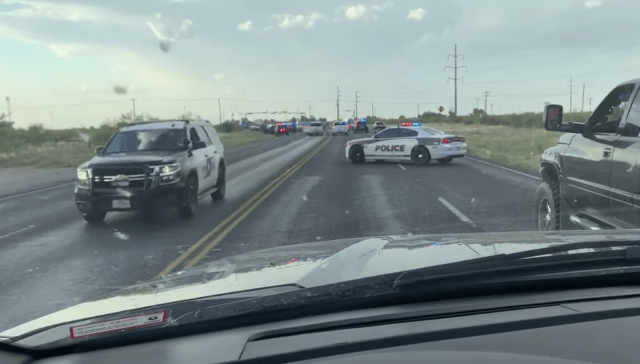 ODESSA, Texas – An alarming video posted on Facebook shows what appear to be family members and others desperately trying to protect themselves during Saturday’s deadly shooting rampage in West Texas.

The video, which lasts less than a minute, is posted under the name Antonio Orozco Garcia. It is titled “Dios mio por favor protegenos” (“My God, please protect us”).

The location appeared to be an empty lot near the Odessa, Texas, movie theater where police ultimately killed the suspect, The Dallas Morning News reported.

In the video, a man is heard telling others, “Get down! Get down! I got you, I got you.” A couple of women are seen trying to cover young children as they all lie on the ground.

When the first shots are fired, children immediately scream in terror. The man then tries to console others, including crying children, as gunshots are heard in the distance.

“It’s OK, it’s OK. You’re going to be OK,” the man tries to reassure the group. He then shouts to individuals, asking if they are OK.

No one in the video appears to have gotten injured but the video ends abruptly. The fate of the people appearing in it remained unclear.

Another Facebook video by the same individual shows traffic stopped as police contain one of the crime scenes.

According to officials, 24 people were shot during the rampage, with five dead. The suspect, a male white in his 30s, was killed by responding officers.

At least three law enforcement officers — a state trooper, an Odessa police officer and a Midland police officer — were among those shot. They were in stable condition Saturday night, according to the Texas Department of Public Safety.