'She really thought that he was going to kidnap her,' says the victim's stepmother 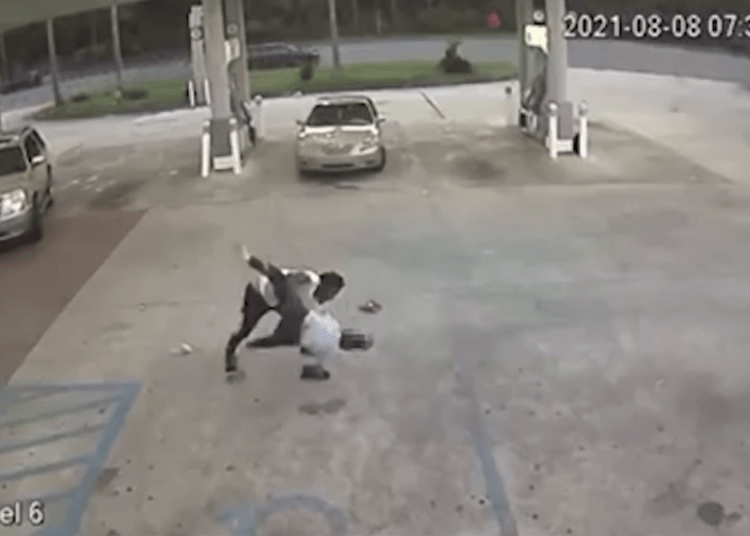 A woman was mauled during a robbery at a Mobile, Alabama gas station. (YouTube)

MOBILE, Ala. — A woman was attacked Sunday night at an Alabama gas station and mauled during a robbery, according to reports.

A surveillance video of the violent crime showed the woman exiting her car and then being attacked by the suspect, FOX 10 TV reported. Police say the victim can be seen getting lifted off the ground and essentially body slammed to the pavement.

Brandon Young, 28, was later identified and arrested for the violent crime. Police said that he fled with the woman’s keys and was taken into custody Tuesday morning. As a result, Young faces a robbery charge and is scheduled to appear in court this week.

FOX 10 TV reported that the manager from the Chevron station called police on Young earlier in the day because he was loitering.

“They came out here, told him to go away and he did. And he came back up here sometime again,” Nazmul Hasan said.

“I’m scared all the time standing outside for a minute,” he asserted.

Hasan says he wants to see more police in the area to keep people safe from those looking to cause trouble.

“They do what they want to do,” he said. “People like us, you know innocent people get hurt every time. All we need is protection.”

The victim reportedly feared being kidnapped, according to one member of her family.

A nearby resident explains the fear she has living in the area of the gas station at Azalea Road and Michael Blvd.

“For it to be right around the corner from where I live, I’m completely shaken up,” said Ravenn Cheese, who was not here at the time, but she could have been. She says she is normally at the store at least three times a week.

“This gas station I felt like was safe,” she said. “It’s well-lit at all times. You just never know where trouble is.”

According to FOX, Young is being held in jail on a meager $3,000 bond.