'Fear is a normal feeling when stepping into a confrontation, but being prepared can help,' she says 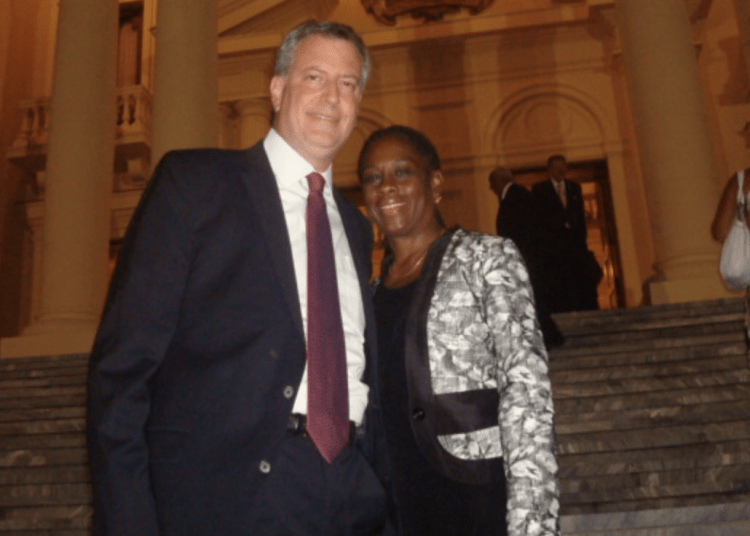 NEW YORK — The wife of New York Mayor Bill de Blasio wants citizens to personally “physically intervene” to stop violent crimes, nine months after she convinced her husband to get aboard the “defund the police” movement by redirecting money from police to “youth initiatives and social services.”

Shootings in New York City doubled in 2020 and were up 75 percent last month compared to a year prior. Burglaries have also increased, and violent, unprovoked crimes against Asians have become endemic, Daily Wire reported.

“As attacks on Asian American communities continue, we’re asking New Yorkers to show up for their neighbors and intervene when witnessing hateful violence or harassment. I know that can be frightening when you aren’t sure what to do or say, but you can learn,” New York City’s First Lady Chirlane McCray wrote on Twitter March 6. “Fear is a normal feeling when stepping into a confrontation, but being prepared can help.”

As attacks on Asian American communities continue, we’re asking New Yorkers to show up for their neighbors and intervene when witnessing hateful violence or harassment. I know that can be frightening when you aren’t sure what to do or say, but you can learn.

As part of her “training,” she suggested that witnesses step into the middle of a “hate crime or incident” and engage directly with the person who is being targeted by asking a question like, “What time is it?”

Moreover, she advised that witnesses “Respond directly to the aggressor or physically intervene and only after assessing the situation. Be confident, assertive, calm. This is risky, but sometimes all we can do is speak up.”

They could also “Support a person in crisis by recording on your phone” and “Check in with the survivor after the incident. This shows them that they are valued.”

Sadly, her shortsighted remarks came about a week after Yong Zheng was killed in Brooklyn intervening in just such a situation, attempting to help a stranger, who was also Asian, whom he saw being robbed, according to Daily Wire.

McCray, a major figure in city government in her own right, has frequently decried anti-black racism and has a fractured relationship with the city’s police. In April de Blasio named his wife, who is black, as co-chair of the city’s Task Force on Racial Inclusion and Equity.

In June, de Blasio put her in charge of a “Commission on Racial Justice and Reconciliation” that will examine whether monuments and buildings honoring founding fathers should be removed or renamed because of their association with slavery, the New York Post reported.

That came after she overrode residents’ vote to erect a statue honoring Mother Frances Cabrini, an Italian-American nun. The statue would have been just one of seven, three of whom were black. McCray said that though the nun “set an example of compassion and leadership that resonates powerfully today… it will take many more years to correct centuries of neglect and the glaring gender and ethnic imbalance in our public spaces.”

NYPD statistics list 20 arrests for alleged anti-Asian hate crimes in 2020. Most of the suspects were black, Daily Wire reported.

On February 25, 2021, 23-year old Salman Mufihi reportedly stabbed a 36-year old Asian man and said, “If he dies, he dies. I don’t give a f**k,” CNN reported. De Blasio called it a “horrible act of violence against an Asian American man out of nowhere, just pure hatred” and said “we have to stop hate.”

However, Mufihi was not charged with a hate crime. Perhaps de Blasio could be more persuasive with prosecutors?

In 2015, NYPD officers turned their backs to de Blasio outside the funeral of Officer Wenjian Liu, who was killed by Ismaaiyl Brinsley, who was angry about perceived injustice against blacks and abuses by police. “The man who killed my husband believed the lie told by the politicians and the radicals that police are evil,” his widow said.

Activists who have frequently protested police abuse and black oppression have appropriated assaults on Asians to promote their causes, with one group blaming “white supremacy” for an alleged black-on-Asian crime. As Intercept reporter Lee Fang noted, New York activists on February 20 held a rally titled, “End the violence towards Asians: Let’s unite against white nationalism” in Washington Square Park to attain “Justice for Vicha Ratanapakdee.”

There’s a “March Against White Nationalism” today in NYC re recent violence against Asians, and this is the social image promoting it. Uhh is there a shred of evidence that 84 year old Vicha Ratanapakdee was killed by “white nationalism”? https://t.co/rsFW2qZQwx pic.twitter.com/XE3VMv0Uy1

Ratanapakdee, an 84-year old man from Thailand, was killed January 28 as he walked in his San Francisco neighborhood at 8:30 a.m. Antoine Watson, a 19-year old black man, was charged with murder.