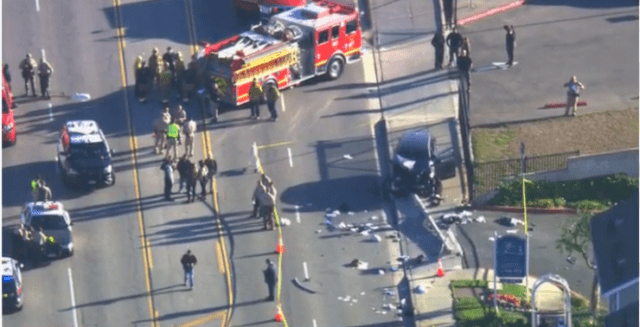 Several police recruits are in critical condition after being struck by a vehicle Wednesday morning. (Screenshot FOX 11 Los Angeles)

WHITTIER, Calif. – A wrong-way driver is responsible for plowing into a group of law enforcement recruits while they were out for a run in South Whittier Wednesday morning. Sheriff Alex Villanueva confirmed 25 recruits are injured with five of them listed in critical condition.

Injuries ranged from head trauma to broken bones and loss of limbs, the sheriff noted, adding that one recruit is on a ventilator.

“Now we’re facing some life-altering injuries for the most severely injured recruits … We hope all of them make a full recovery, and they’ll have a chance to come back and complete the academy. That’s my goal,” Villanueva said.

The unnamed 22-year-old driver also sustained unspecified minor injuries. The driver blew a .00 on the breathalyzer. It’s unclear if drugs were a factor.

During their morning run, recruits were accompanied by two black-and-white safety vehicles. Some recruits donned reflective vests for safety, while others wore bright white shirts.

Villanueva said some recruits said they heard the vehicle accelerating up to 30 to 40 mph before plowing into the group of runners, and no skid marks were left prior to mowing them over, KTLA reported.

“It is hard to see because these young people are getting ready to go put themselves in the line of danger in their career, and who knows that while you’re training to do that, you’ve put yourself in harm’s way,” Capt. Sheila Kelliher with the Los Angeles County Fire Department told reporters. “My heart goes out to all of them as they pursue this career. I hope they all have speedy recoveries and that they’re in good shape.”

WHITTIER, Calif. – A group of law enforcement recruits apparently out on a class run are in critical condition after they were mowed down by a car in Whittier, authorities said.

The California Highway Patrol investigating the horrific crash, which was reported at 6:30 a.m. and occurred near the intersection of Mills Avenue and Telegraph Road. The recruits attend the Los Angeles County Sheriff’s Training Academy and Regional Services (STARS) Center located in the 11500 block of Colima Road, which is less than two miles from the collision scene, FOX 11 Los Angeles reported.

Authorities said the striking driver was given a series of field sobriety tests (FSTs) and was subsequently taken into custody. Charges remain unknown at the present time.

FOX 11 reports more than a dozen victims were transported to multiple hospitals and trauma centers.

The circumstances leading up to the driver striking the class of law enforcement recruits remains under investigation, and no further details were immediately available.

A neighbor told FOX 11 that recruits often jog in the area and run in packs wearing high-visibility reflective vests during their outings on public streets.

Sheriff Alex Villanueva was reportedly enroute to area hospitals to check on the status of LASD’s recruits.

Impacted roads are expected to be closed for a substantial period of time during the investigation.