The police department was missing 7.6 percent of their workforce on Tuesday, double the norm 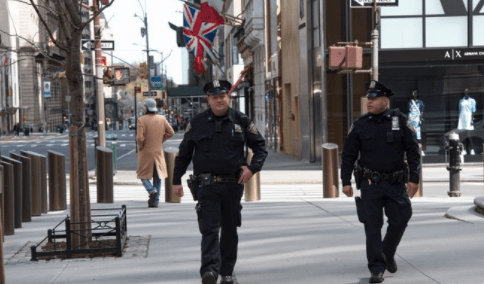 As of Tuesday, there were 211 positive NYPD cases, including 177 uniformed officers and the remainder being civilian employees of the department, Fox News reported.

NYPD Commissioner Dermot Shea used Twitter to remind residents in New York and elsewhere to “#StayAtHome” in an effort to help protect first responders, health care workers and other people who still have to report to work amid widespread coronavirus-related closures.

New York City and beyond:

In total, NYPD had 2,774 employees out sick Tuesday — a number that accounts for 7.6 percent of the department’s uniformed workforce.

That’s more than double the amount of officers who call out sick on a typical day, the New York Post reported.

At one point, so many officers in the 1st Precinct had called out that the NYPD Movie and Television Unit was called to fill in depleted ranks there, Law Officer reported last week.

Despite the large number of employees who are out sick, the NYPD on its official Twitter said it would continue patrols across the city. Most noteworthy, the agency said it would hire additional cleaning staff for its facilities in another effort to slow the spread of the virus.

During this pandemic, the NYPD is hiring additional cleaning staff to sanitize our facilities. These men and women will ensure that the officers who protect NYC have a clean work environment as we continue to keep New Yorkers safe. pic.twitter.com/otbOFeNO9W

The crisis in New York even attracted attention from the White House coronavirus task force on Tuesday.

He added that the federal government would “surge resources” to help fight the crisis, including the deployment of USNS Comfort hospital ship and medical supplies.

New York state had at least 25,665 confirmed coronavirus cases and at least 210 deaths as of Tuesday.