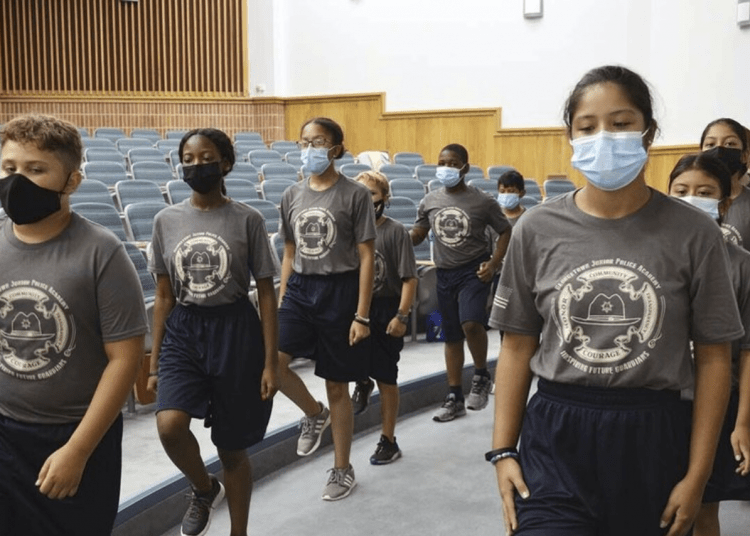 Teamwork, discipline and motivation were prevalent throughout the six-day experience, according to authorities running the program, U.S. News reported.

“This is not a camp. This is a very structured academy experience. It’s very paramilitary,” said Georgetown Police Detective Joey Melvin, a school resource officer in the Indian River School District and organizer of the academy.

“They learn about teamwork. It’s about accountability. They learn about how individual responsibility affects everyone. So if one makes a mistake, … then everybody has to pay for it.”

“I wanted to come here because I thought it would respect my Pop Pop because he did Army. It was like the motivation, … that he told me to never to give up and just push through,” Morris said.

Among the guest officers calling out commands were Anthony “Smitty” Smith of the Dover Police Department and Pfc. Robert Scisco, a school resource officer with the Rehoboth Beach Police Department.

“The discipline, it was really shocking,” 13-year-old Karime Sanchez said. “You would be nervous at first because you didn’t know how to act. But now that I know, part of it helps me remember that we’re all a group, and if something happens, we have to help each other to become together and make sure we have everything completed.”

The program is structured for youth in grades six through eight. The academy featured rigorous routines, physical fitness and a tight schedule, punctuated by guest speakers and demonstrations from various agencies, according to U.S. News.

There were also presentations from a variety of criminal justice organizations like the DEA and DOC.

One dramatic virtual event brought the story of Rose Schindler, a Holocaust survivor whose mother and younger sister were taken to a gas chamber.

“Rose, she was a survivor of the Holocaust,” said Sanchez. “That was really interesting. But it was sad at the same time. She went through a lot.”

Detective Melvin said sharing stories like these will aid the students during difficult circumstances in life.

“Hopefully, when they think they are having a bad day or things are rough, they will reflect on that,” he said.