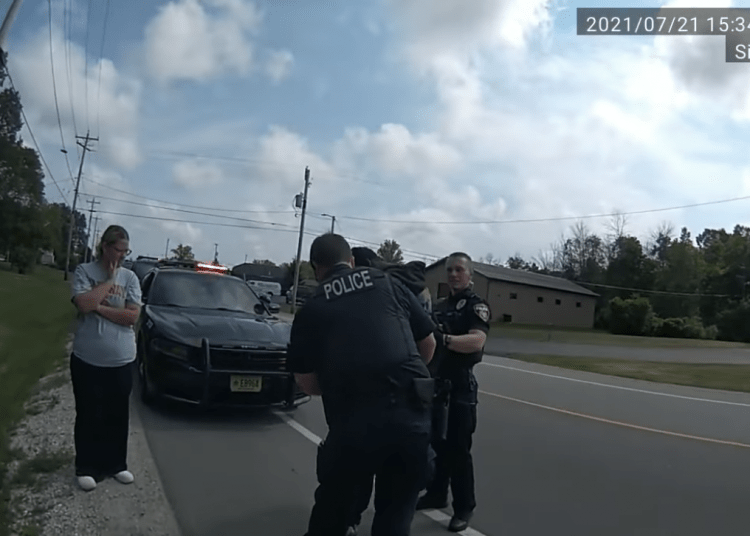 VILLAGE OF CALEDONIA, Wis. — The Village of Caledonia Police Department in Wisconsin is responding to false allegations circulating on social media that one of their officers “planted evidence” during a traffic stop.

The detention took place on Wednesday at about 3:22 p.m. when officers conducted a traffic stop for a vehicle traveling 63 mph in a 45 mph zone. The driver was identified by her driver’s license, and two rear passengers who were not wearing seatbelts were asked to identify themselves and were later removed from the vehicle, police said. The unidentified front passenger recorded a video on his cell phone that was later posted to social media with the caption, “Cop caught in 4K planting evidence,” Fox News reported.

The passenger believes he’s filming police misconduct when an officer tosses debris taken from another passenger into the back of the vehicle. The front passenger tells him, “I got you on camera, bro.”

The officer objectively responds, “I got you on camera, we’re all good.”

“Hey buddy, you just threw that in here,” the passengers asserts, filming a plastic bag in the back seat.

Now the police need to set the record straight as cop bashing stories have spun out of control.

Chief Christopher Botsch of the Village of Caledonia Police Department released two clips of body camera footage on Saturday. The footage was taken from each officer’s perspective, adding more context and clarity to what actually transpired.

The chief said the first video shows officers search one of the rear passengers outside the vehicle and an “empty corner tear,” or corner of a plastic baggie, was found in the person’s pocket, Fox reported.

“The empty corner tear did NOT contain any illegal substance; however, this type of packaging is a common method for holding illegal drugs,” Botsch said in a summary of events shared to Facebook.

The searching officer turned the empty corner tear over to another officer, who then passed it to the officer seen in the cell phone video that circulated online, Botsch said. Essentially, it is nothing more than debris.

“Since there were NO DRUGS in the corner tear, the officers discarded the empty packaging material in the vehicle,” the chief wrote. “This is what was observed in the video.”

The second bodycam clip shows the officer approach the vehicle, while the front passenger who was allowed to remain in place, records the movements using his cell phone camera. During this encounter, the passenger accuses the officer of throwing the plastic baggie in the vehicle.

The officer responds, “Yeah, because it was in his pocket and I don’t want to hold onto it. It’s on their bodycam that they took it off of him.”

The officer attempts to be more persuasive, according to the video.

“I’m telling you where it came from,” the officer insists. “It’s an empty baggie at the moment too.”

The chief places a note of emphasis on the incident.

“While we would discourage officers from discarding items into a citizen’s vehicle, the video is clear that the officer is NOT planting evidence or doing anything illegal,” Botsch said in the post shared to the department’s page. “Additionally, the empty corner tear is not itself illegal.”

No arrests were made as a result of the stop and subsequent detention. However, the driver was ultimately cited for speeding, Fox reported.

“Since four officers were present on scene, the body worn camera footage and squad camera footage totals in excess of 6 hours of video,” Botsch said. “We are still in the process of reviewing the videos. All videos, in their entirety, will be released in the very near future.”