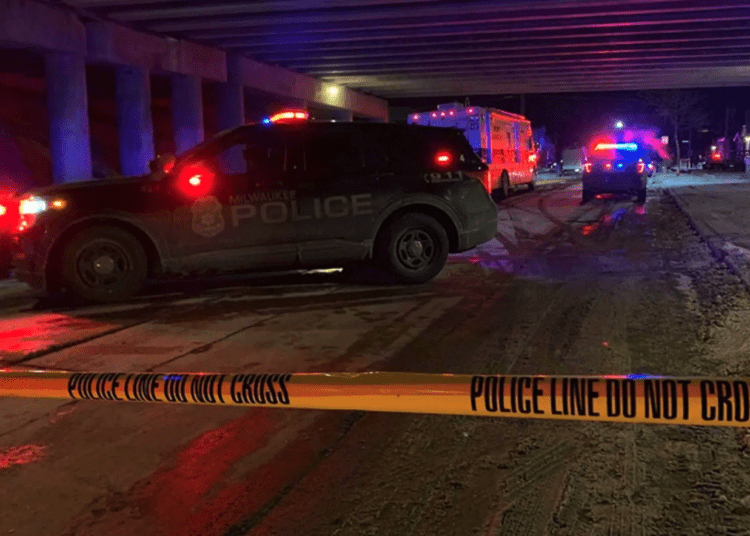 Law enforcement authorities are searching for a gunman after a Milwaukee County Sheriff's deputy was shot. (Screenshot Fox 6 Milwaukee/ WITI)

MILWAUKEE – A sheriff’s deputy in Wisconsin was shot multiple times after going into a foot pursuit that originated from a traffic stop. The suspect continued to flee the scene on foot after the shooting and law enforcement authorities are engaged in a manhunt.

The deputy conducted a traffic stop in the area of W. Adler and S. 68th Street in Milwaukee. As the stop was initiated, a passenger bolted from the vehicle on foot, and the deputy gave chase, Fox News reported.

While engaging in the foot pursuit near 64th and Adler, the deputy sustained multiple gunshot wounds.

The deputy was conscious, breathing and receiving treatment at about 3:30 a.m., according to the Milwaukee County Sheriff’s Office, which tweeted a “MAJOR INCIDENT ALERT.”

2/2: As of about 3:30 a.m., the deputy was conscious, breathing & receiving treatment. The suspect vehicle driver is in custody. The shooter/passenger, considered armed/dangerous, is at large. West Allis & Milwaukee police departments are assisting in the search.

The driver and vehicle are in custody, according to the sheriff’s office, yet the gunman remains at large. The suspect is described as a male, black, with a skinny build who is wearing a black t-shirt and no coat, Fox 6 Milwaukee reported. There were no further details immediately available.

The sheriff’s office is receiving assistance from the Milwaukee and West Allis Police Departments as they search for the suspect.

A “shelter in place” notice has gone out to mobile phones in that part of Milwaukee and two schools in the area are going virtual today due to the manhunt.

While searching the area, sheriff’s deputies and officers encountered a male crouching behind a vehicle near 60th and Main and verbally engaged him. At that time, officials heard a single gunshot and found the male lying on the ground from a self-inflicted gunshot wound, Fox 6 reported.

Preliminary investigation suggests that this person was responsible for shooting the deputy sheriff. The gunman’s identity has not yet been disclosed.

“This morning, a courageous deputy sheriff placed himself in harm’s way, sacrificing his own safety to protect our community. The people of Milwaukee County should be very proud of this devoted public servant. The prayers and healing thoughts of all members of the Milwaukee County Sheriff’s Office are with our injured comrade and his family as they navigate this challenging time. We wish our deputy a full recovery and extend our strongest support to him.”

“I extend my appreciation to the residents and business owners who cooperated with this morning’s shelter-in-place order and helped ensure public safety during the investigation.”