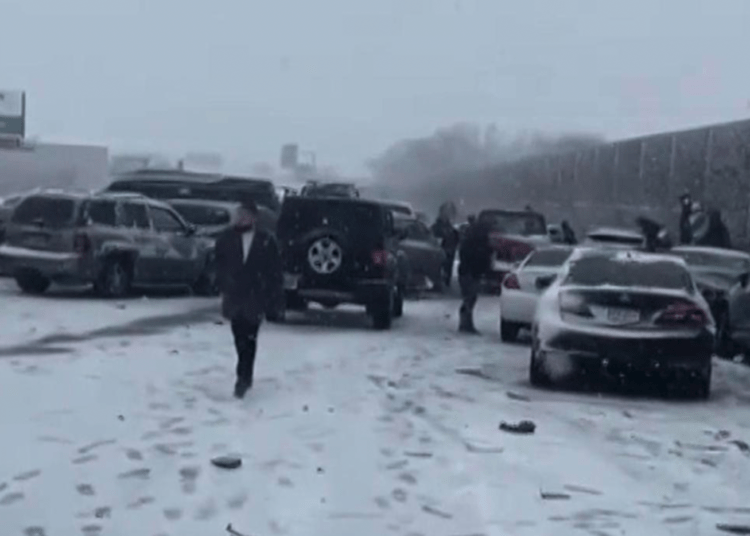 A massive 73-car pileup occurred Saturday on I-581 in Cumberland County, Pennsylvania. (Twitter via Aol.com)

CUMBERLAND COUNTY, Pa. – An East Cost storm system referred to as a “bomb cyclone” led to a 73-vehicle pileup on a Pennsylvania highway just after 2 p.m. on Saturday.

According to Pennsylvania State Police, the massive chain reaction crash on Interstate 581 in Cumberland County led to injuries sustained by 10 people, Aol.com reported.

Trooper Megan Ammerman said injuries ranged from “minor to moderate.” Injured parties were transported to local hospitals in order to be triaged and treated by medical staff.

CUMBERLAND COUNTY CRASH: 73 vehicles were involved in the crash… 43 vehicles sustained damage. 10 people were injured. Thank you to all the fire departments, penndot and all of the local agencies for the help! pic.twitter.com/0h3OLBkudQ

The interstate was closed for four house while law enforcement authorities investigated in the frigid weather, NBC of Philadelphia reported.

Motorists and other witnesses reported whiteout conditions prior to the crash, according to WHTM-TV.

I pray none of my friends were involved in this huge crash!
Over 70 Vehicles Involved in Massive Pile-Up on Snowy Pennsylvania Interstate Following Flash Freeze
The weather is one of the reasons I moved away from PAhttps://t.co/klKepxddR0

Buses were deployed to pick up people without serious injuries who were involved in the crash, Ammerman noted on Twitter. The people were taken to the New Cumberland Borough Fire Department, which had opened a warming and reunification site.