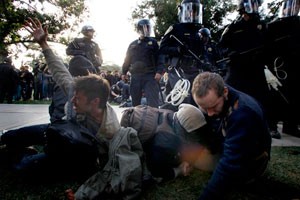 Was Calif. Police Use of Pepper Spray Justified?

Was Calif. Police Use of Pepper Spray Justified?

It also set off a debate about how far officers can and should go to disperse peaceful demonstrators.

While many students, lawmakers and even the university's chancellor saw the officers' actions as excessive, some experts on police tactics say, depending on the circumstances, pepper spray can be a less violent crowd control measure than dragging protesters away or swinging at them with truncheons.

"Between verbalized commands and knock-down, drag-out fights, there's quite a bit of wiggle room," said David Klinger, a former Los Angeles Police Department officer and instructor at the University of Missouri-St. Louis who reviewed the pepper spray footage.

"When you've got a bunch of people who are clearly noncompliant, locking arms, it doesn't look good (on camera)," he said.

Soon after the incident on Friday at the University of California, Davis, video recordings spread across the Internet.

The footage of an officer casually spraying an orange cloud over protesters while spectators screamed in horror joined other much-discussed pepper-spray incidents, such as the 84-year-old activist hit in the face in Seattle and a Portland, Ore., woman who recently was sprayed in the mouth.

Images of the officer seen spraying the protesters became the subject of a blog, which featured him spraying famous figures, from Gandhi to John F. Kennedy.

The university announced Monday that it has placed the police chief and two officers on administrative leave to restore trust and calm.

Still, nearly 2,000 students and residents gathered at the main quad to hear speeches and chant slogans against police and university officials. Students who were pepper-sprayed opened the protest, saying they felt unsafe on campus with the chancellor in power.

"We were just kids sitting down in a circle singing," said student David Buscho, 22, of San Rafael, Calif. "It felt like hot glass … I was paralyzed with fear."

Pepper spray is an inflammatory agent that derives its active ingredient from chili peppers. When the spray is deployed, it causes nearly instant inflammation, resulting in dilation of the capillaries in the eyes, paralysis of the larynx and a burning sensation on the skin.

Buscho said students were yelling at police Friday that they were peacefully protesting. One of the helmeted officers began pointing a spray can directly at protesters' faces, he said.

"I had my arms around my girlfriend. I just kissed her on the forehead and then he sprayed us," he said. "Immediately, we were blinded … He just sprayed us again and again and we were completely powerless to do anything."

The protest was held in support of the overall Occupy Wall Street movement and in solidarity with protesters at the University of California, Berkeley who were struck by police with batons on Nov. 9.

The UC Davis footage shows two officers spraying students in the face with the chemical agent as the crowd cries out, then a slight delay before police start hauling off some of those seated while other protesters cough violently and try to crawl away.

The spray the officers used ranked about halfway between the highest and lowest concentrations of the commercially available substance.

Since the video began circulating Friday night, UC Davis Chancellor Linda Katehi said she has been inundated with calls from alumni, students and faculty to speed up an investigation. Students and faculty have called for her resignation.

"I'm here to apologize," she told the crowd. "I really feel horrible for what happened on Friday."

The spraying has reverberated far beyond the university, spawning a debate about the officers' use of force.

Decisions on using pepper spray ranges by department and depends largely on the community and the police chief, Klinger said.

Klinger said the officers could have turned to other methods, such as a so-called pain compliance hold, but that would bring its own set of complications. A protester could receive a broken arm, he said, or an officer could pull a muscle.

Charles J. Key, a former lieutenant with the Baltimore Police Department who wrote the department's use-of-force manual, said that officers were clearly within their rights to use it.

After reviewing the footage, Key said he observed at least two cases of protesters actively resisting police. In one, a woman pulls her arm back from an officer. In the second, a protester curls into a ball. Each of those actions could have warranted more force, including baton strikes and pressure-point techniques, he said.

The federal courts have ruled on such cases. At the 9th U.S. Circuit Court of Appeals, which covers courts in nine Western states, the cases have centered on whether or not the protesters were involved in what is called "active resistance".

The court used the term in considering a case about another highly circulated video of a group of passive demonstrators being swabbed with pepper spray in 1997. The protesters had linked arms on the floor of a California congressman's office to protest the logging of old-growth redwood trees on California's North Coast.

Because demonstrators were using a metal sleeve to prevent police from separating them, police argued their "active resistance" left them no other way to disperse them than dabbing their eyes with Q-tips soaked in pepper spray, said Jim Wheaton, an attorney who assisted the prosecution of the civil case.

The 9th Circuit ruled that the protesters weren't in "active resistance," and because they were sitting peacefully, the use of pepper spray was excessive.

"Pepper spray is designed to protect people from a violent attack, to stop somebody from doing something," said Wheaton, senior counsel for the Oakland-based First Amendment Project.

UC Davis police used "it as a torture device to force someone to do something, and that's exactly what the 9th Circuit said was unreasonable and excessive."