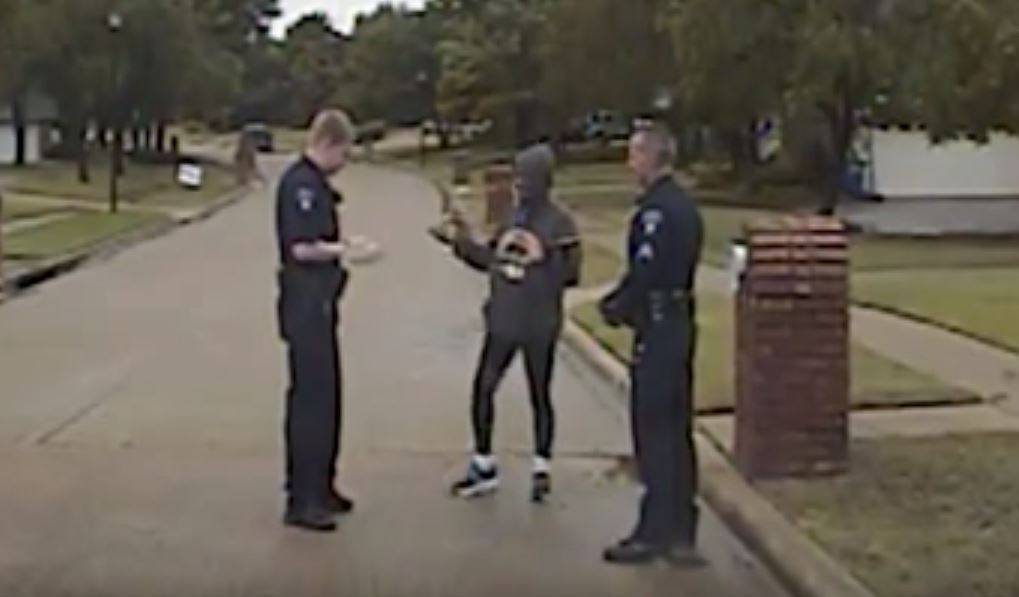 Anyone in law enforcement today knows to never think they have seen it all.  Just when you think it can’t get any stranger it does and today’s story is out of Corinth, Texas.

Dorothy Bland is the director for the Frank W. Mayborn Graduate Institute of Journalism at the University of North Texas and while walking in the middle of her neighborhood street with ear buds she was swinging her arms in the air and failed to notice a truck that had to come to a complete stop to avoid striking her.  Two Officers from the Corinth Police Department were behind her and observed the truck come to a stop at which time the driver of the truck gestured at the officers to do something about it.

Both officers exited their car and approached Ms. Bland.  They were friendly, calm and immediately told Ms. Bland that she was stopped because she was walking in the middle of the street and was almost struck by another vehicle.  They told her that they were concerned for her safety and advised her to walk on the sidewalk.  She did not have any identification.  They took her name and checked her for warrants.  Upon releasing Ms. Bland, the officers shook her hand and both smiled as they went on with their day.  This police-citizen encounter lasted less than four minutes and was as normal as they come.

Except its 2015 and nothing is as it may appear.
On October 28, 2015, Ms. Bland wrote her story on this encounter in the Dallas Morning News and said she was caught “walking while black.”  By the end of this week it had appeared across the globe on various websites and social media posts.  It seems that it is national news when a citizen violates the law walking down the middle of a street where a sidewalk exists while almost getting struck by a vehicle and local police officers make a decision to advise the citizen of the danger she was in in a very polite and non-confrontational way.

Welcome to Law Enforcement in 2015.
Ms. Bland ought to be ashamed of herself.  She identifies her encounter on this day with Trayvon Martin, Freddie Gray and Sandra Bland.  She said that “for anyone who doesn’t think racial profiling happens, I can assure you it does happen” before she walked to the Mayor’s House “for a sanity check” to ask him if she looked like a criminal.  Isn’t it ironic that immediately after making a statement that she was profiled, it seems that her rule before the police could stop anyone is that the person must “look like a criminal?”

Law Enforcement should be thankful this week.
We should be thankful that Ms. Bland doesn’t get to make up the rules of the police.  We have a myriad of court decisions and our Constitution that tell us very clearly when we can take police action and just in case Ms. Bland finds this article, if you commit a crime in front of a police officer or do something that is unsafe to your health, rest assured that common sense Americans expect law enforcement to act….regardless of your race or what you look like.

We should also be thankful that the Corinth Police Department and specifically these fine officers recorded the entire encounter with Ms. Bland and that Corinth Chief Debra Walthall gave a timely and excellent response to this non-sense.  Can you imagine where we would be today if the video did not exist?

This police encounter was one of hundreds of thousands that occurred this week alone and in my two decades of law enforcement it was as good as they come.  A columnists from Law Officer sent me this information today with the caption “sit down….you are part of the problem.”  I couldn’t agree more.  Ms. Bland is the problem but despite that, law enforcement will continue.  The work in front of us is too important and we should all be grateful that there are officers such as these in Corinth, Texas that will continue to do their job and a Chief such as Debra Walthall that will stand up and defend good cops in the face of poor behaving citizens.