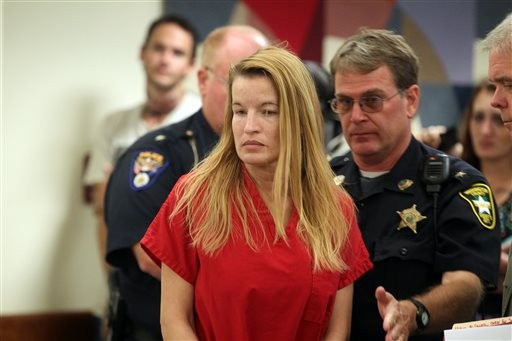 BARRE, Vermont (AP) – A woman charged with killing a social worker because she was upset about losing custody of her 9-year-old daughter was "calm and laughing" as police arrived on the scene minutes after the shooting, according to court records released Monday.

Jody Herring, 40, pleaded not guilty in Court on Monday and was ordered held without bail. She was arrested Friday following the death of Lara Sobel who police say was shot twice in the head – including once when she was already on the ground.

Police also believe that before shooting 48-year-old Sobel, Herring shot and killed her own two cousins and an aunt in the neighboring town of Berlin. Charges have not been filed in connection with the deaths of Regina Herring, 43, and Rhonda Herring, 48, the suspect's cousins; and Julianne Falzarano, 73, an aunt.

When police arrived, Herring was "very calm and laughing," the police report said. Later on, she was still talking about the shooting "like it was no big deal," officers said.

However, as police continued to interview her, Herring became agitated, saying that they had never helped her when her boyfriend beat her and complaining about the injustices she suffered at the hands of the department of children and families.

The court record also shows that Herring left two phone messages for her brother, Dwayne Herring, about two hours before Sobel was killed. In the first, she urges him to call her immediately. Four minutes later, she left a message saying: "Watch the news and you'll wish you got ahold of me earlier."

On Sunday, about 300 people paid tribute to Sobel.

"Lara was a beautiful, beautiful individual and she really, really cared about the kids, all the kids," Joseph Faryniarz, a cousin of Sobel's husband, said during the vigil. "This is a tragedy and the family is doing the best that it can."

The Burlington Free Press reported that Tiffany Herring, 23, who identified herself as the daughter of one of the victims, said her mother received a threatening phone call from Jody Herring on Friday morning.

She said: "You guys need to stop calling DCF unless you guys are going to have it coming to you," Tiffany Herring told the newspaper.

She said she discovered the women's bodies.

Police Chief Tim Bombardier would not comment on whether Jody Herring had obtained the rifle legitimately or what may have triggered her to act Friday – weeks after losing custody of her daughter.

"That's one of those things that's open to interpretation, so I'm going to stay away from it," Bombardier told The Associated Press.

He also would not discuss the 9-year-old's father or his whereabouts. Officials said after Sobel's shooting that the girl remained in state custody.