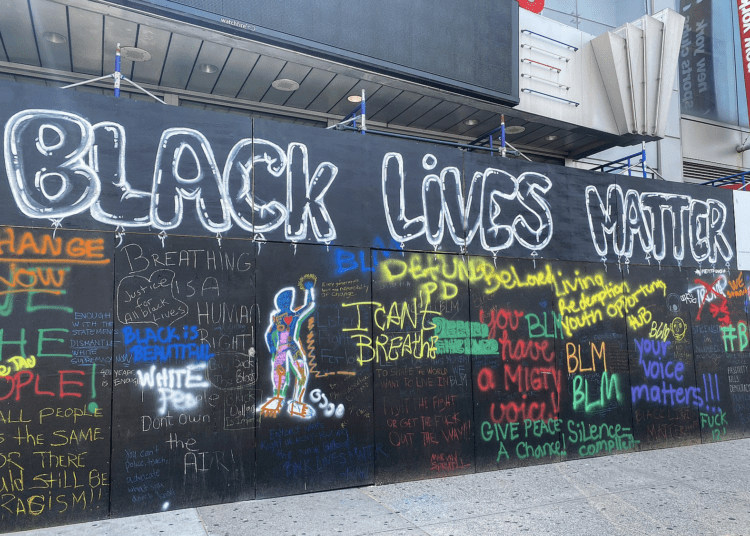 MONTPELIER, Vt. — The Montpelier City Council in Vermont unanimously rejected a petition to paint an American flag and the phrase “Liberty and Justice for All” in front of the Vermont State House.

The local governing authority made its decision in a contentious Wednesday night meeting where the members heard arguments for the murals from GOP gubernatorial candidate John Klar and several other supporters. Klar wanted to paint the flag on one side of an existing “Black Lives Matter” motto on the street, and the phrase “Liberty and Justice for All” in red, white, and blue painted on the other side, reported The Daily Wire.

The city council rejected the petition on appeal after the Montpelier city manager’s office rejected a petition by Klar to close State Street in order to paint the mural. The office said the city needed at least 45 days to approve a street closure, according to the VT Digger.

However, the council previously demonstrated extreme flexibility when it came to BLM street art.

On June 12, the city council appeared to forgo the 45-day rule in an “emergency” meeting to approve painting the phrase “Black Lives Matter” down State Street in front of the State House the next day, The Daily Wire reported.

“Today, at the June 12th – Emergency City Council Meeting, Montpelier City Council approved closing State Street between Taylor Street and Bailey Ave from 7am- 2pm tomorrow June 13th, 2020 for the purpose of having volunteers paint the phrase Black Lives Matter on State Street in front of the State House,” the city wrote on Facebook.

Klar has pledged to take the city to court for favoring one type of political speech over another in a public venue.

Casey seemed to have a personal vendetta against Klar, according to The Daily Wire report.

“I don’t think all conservatives are racist either, John,” said Casey. “But I definitely think you are, so I’ll absolutely oppose this.”

“Until we can recognize that Black lives matter, I don’t think ‘liberty and justice for all’ is alive and well in America,” Casey continued. “So I apologize, Mr. Klar, if I am doubting your intentions with coming in here with this request but I read some of your commentary pieces and I find them offensive.”

Casey did not respond to Daily Wire requests for comment or to substantiate the charge against Klar.

Klar has written 45 commentary articles for the website American Thinker, most dealing with Vermont politics. Of the articles, a Daily Wire review of the materials found six that mentioned race or Black Lives Matter. The most recent, written July 8, is an article on Klar’s fight with the Montpelier city council to paint “liberty and justice for all” alongside the “Black Lives Matter” message on State Street.

“I stand by all my articles,” Klar told The Daily Wire in an interview on Friday. “I want the country to look at what Vermont is doing so thats why I write for American Thinker, to warn the rest of the country about the progressive front line here … They are completely out of control.”

“I’m a former public defender, and I’ve raised over $25,000 for Ugandan children over the last five years. I’m anything but a racist,” Klar said in an email, adding that he regrets having to defend himself from the charge leveled by Casey.

Klar said he has partnered with an Ugandan pastor, Simon Peter Otudo, since 2016, to support financially through personal donations and fundraisers a school for orphaned children that Otudo runs. A review of financial documents given to The Daily Wire showed that since October 2018, Klar has donated over $1,700 to Otudo.

“To call somebody the n-word is a horrible offense and to call someone a racist without evidence is comparable, if not equal, in its content for a fellow human,” Klar told The Daily Wire.