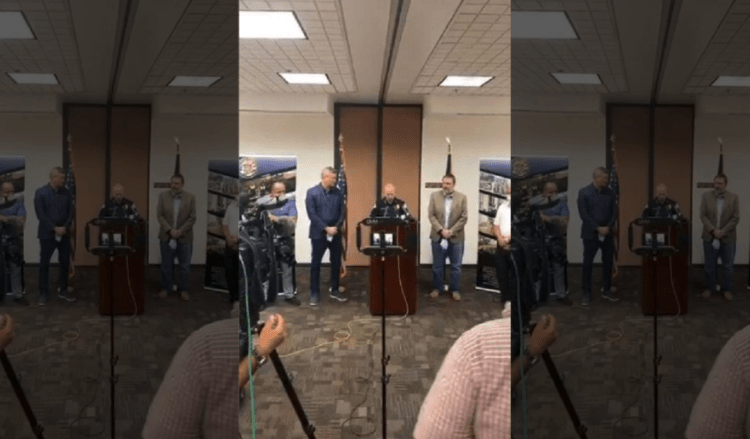 Ogden, Utah Police Chief Randy Watt holds a news conference to announce the death of one of his officers during a domestic violence response call Thursday. (Ogden Police Department Facebook)

OGDEN, Utah – A Utah police officer died after a fatal shooting and another was injured while handling a domestic violence call Thursday, authorities said.

“Our hearts are broken. We’ve lost one of our own,” said Ogden Police Chief Randy Watt, according to DeseretNews. “The days to come will be hectic for us.”

The shooting occurred around 12:15 p.m. in the 300 block of Jackson Avenue in Ogden, located 40 miles north of Salt Lake City, when officers responded to a call from a woman who said her husband had threatened to kill her, Fox News reported.

The man was uncooperative with officers, and eventually went back into his house and slammed the door behind him, according to Watt.

“As officers moved quickly to the door in an attempt to follow the suspect, he began firing through the door,” the chief said.

The officer who was killed was dragged from the scene and taken to a hospital, where he was pronounced dead.

“A fine young officer with just 15 months on the job was killed,” Watt said during a news conference.

Moreover, an adult probation and parole officer was also struck by gunfire and taken to a hospital with a non-life-threatening wound, Watt said. The gunman was also killed by officers, he said.

Children inside the home were removed and found unharmed. The gunman was found dead inside.

The shooting triggered a lockdown of the neighborhood in the northeast part of the city. Watt did not identify the murdered officer or the suspect.

“There is no greater love than to lay down one’s life for one’s friends. The worst days in this profession are those where we lose our brothers and sisters in the line of duty. Information is still being gathered. Take a moment to think on and honor the fallen officer, their family, their colleagues and their communities,” a Facebook post from the Utah Fraternal Order of Police said.

Utah Department of Corrections executive director Mike Haddon issued a brief statement Thursday afternoon saying the AP&P officer had been released from the hospital, according to DeseretNews.

“One of our agents was struck by gunfire as he and his partner responded to an emergency call. Our agent has been treated and released from a local hospital for non-life-threatening wounds. We will not be releasing the name at this time. We have no further comment, except that our hearts are broken and we mourn with the Ogden Police Department for the loss of a fellow law enforcement officer. Our thoughts and prayers are with the family of this fallen hero.”