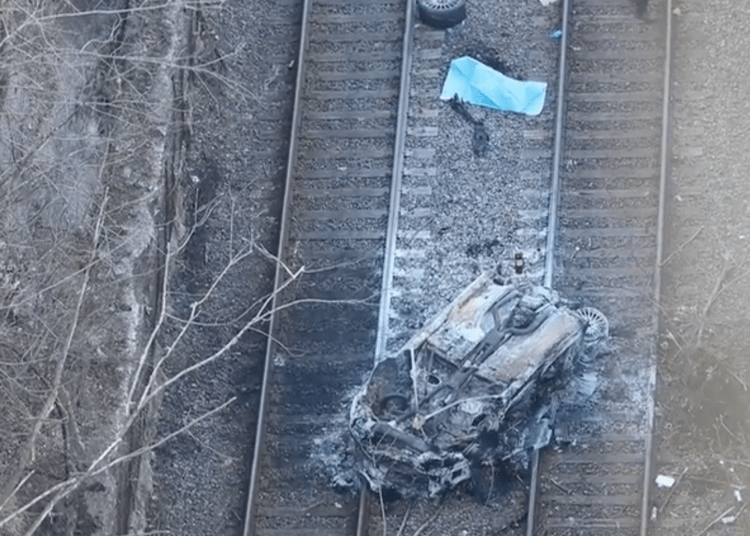 The driver of a BMW lost control and went over a barrier in Upper Manhattan, plunging onto the Amtrak tracks about 500 feet below. (Screenshot New York Post)

A BMW was heading south on the Henry Hudson Parkway around 1:45 a.m. when the driver started to lose control of the automobile, the New York Post reported.

As the motorist lost all control, the vehicle hit a barrier at West 178th Street and launched into the air. With no where to go but down, the car plunged 500 feet below, landing on the railroad tracks, police sources said.

According to authorities, the BMW burst into flames upon impact with the ground. One unidentified person was later found dead inside the car.

The unnamed driver was a 39-year-old man. He was thrown from the vehicle and found dead at the scene, according to police.

Amtrak issued a “SERVICE ADVISORY” which alerted customers of delays as a result of the deadly wreck.

SERVICE ADVISORY: Due to a vehicle on the tracks and law enforcement personnel near the tracks customers may experience delays between New York (NYP) and Albany-Rensselaer (ALB).

“Due to a vehicle on the tracks and law enforcement personnel near the tracks, customers may experience delays between New York (NYP) and Albany-Rensselaer (ALB),” Amtrak tweeted Monday morning.