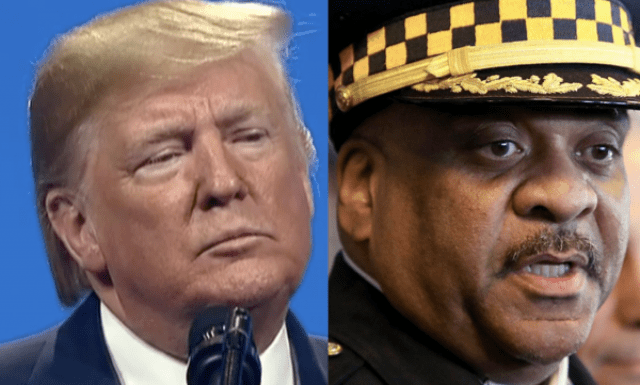 CHICAGO – President Trump tore into Chicago’s absentee police superintendent on Monday at a law enforcement conference in the city, blasting Eddie Johnson for soaring violent crime rates and accusing him of putting “criminals and illegal aliens” before Windy City residents.

The series of broadsides from the commander-in-chief came after Johnson boycotted the president’s speech at the International Association of Chiefs of Police conference in Chicago. Trump went after Johnson at length before delivering into prepared remarks. During the lambasting, the president suggested the absentee police superintendent should be replaced while describing the ever-growing dangers in Chicago, Fox News reported.

“People like Johnson put criminals and illegal aliens before the citizens of Chicago,” Trump said. “Those are his values and, frankly, those values to me are a disgrace.”

Chicago is a “sanctuary city” where local authorities do not cooperate with federal immigration officials, denying information that would help them deport people living in the U.S. illegally. Proponents say Chicago’s efforts encourage cooperation between local police and immigrant communities.

Trump, who has long been a critic of Chicago’s policies dating back to former Mayor Rahm Emanuel’s time in office, was in the city to, among other things, sign an executive order establishing the Commission on Law Enforcement and the Administration of Justice. Yet he repeatedly criticized Johnson for the city’s rampant gun violence, while saying rank-and-file officers deserve a leader who has their backs and “who sides with you.”

“It’s embarrassing to us as a nation,” Trump said. “All over the world they’re talking about Chicago. Afghanistan is a safe place by comparison.”

The murder rate in Chicago for 2018 was still much higher than the combined number of homicides in America’s two largest cities, New York and Los Angeles. As of about mid-December last year, New York reported 278 homicides and Los Angeles 243.

Johnson, who attended a number of other events at the conference, told local media in Chicago that his decision not to attend Trump’s speech was because of “personal feelings.”

“I have to take into account, not just my personal feelings about it, but our core values as a city,” Johnson said. “We are nothing without trust and with some of our communities under siege, it just doesn’t line up with our city’s core values along with my personal values.”

Trump did not take Johnson’s “values” comment well – reviving criticism of Johnson and Chicago that he started during last year’s IACP conference in Orlando, reported Fox.

“More than anyone else this person should be here because maybe he could learn something,” Trump said of Johnson. “That’s a very insulting statement after all I’ve done for the police.”

Trump added: “I want Eddie Johnson to change his values and to change them fast.”

Johnson’s decision to skip Trump’s address also angered the city’s chapter of the Fraternal Order of Police, which said in a Facebook post, “Such a gesture would be an insult to both President Trump and the office of the presidency itself and would be a mark of disgrace upon the city throughout the entire nation, including Mayor Lori Lightfoot.” Lightfoot has also refused to meet with Trump while he is in the city.

FOP Lodge 7, which represents rank-and-file Chicago police officers, then announced that it had cast a vote of no confidence in the police superintendent.

While Trump was giving his speech, the Chicago police were on high alert dealing with a number of planned protests against the president.

Protesters by the dozens streamed toward the Trump International Hotel and Tower in Chicago hours before a planned demonstration outside.

Waiting for them, it seemed, was an equal number of uniformed police officers.

Temporary fencing and city snowplows blocked Wabash Avenue, preventing anyone from crossing the Chicago River to stand directly in front of the hotel.

Some protestors carried signs with the words “Impeach Trump” and “Trump is a traitor” and other slogans. And a few wore Trump masks, something that was popular last Halloween.