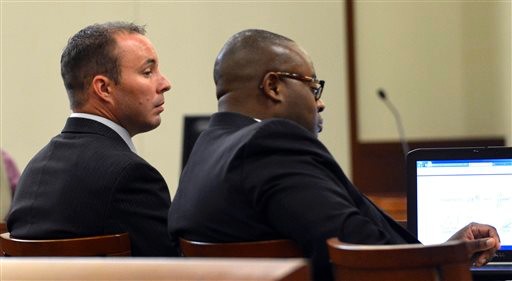 CHARLOTTE, N.C. (AP) — After nearly two years, a trial began Monday for a white Charlotte police officer accused of fatally shooting an unarmed black man who was looking for help.

Twenty-nine-year-old Randall Kerrick is charged with voluntary manslaughter in the September 2013 death of 24-year-old Jonathan Ferrell, a former Florida A&M football player. If convicted, Kerrick faces up to 11 years in prison.

Prosecutors say the shooting was a case of excessive force, while defense attorneys say Kerrick acted in self-defense. Kerrick joined the Charlotte-Mecklenburg Police Department in 2011, after working as an animal control officer.

Dressed in a suit and tie, Kerrick sat in court Monday morning as his attorneys and prosecutors worked out details. More than 200 people are scheduled to testify, and jury selection alone could take weeks.

One motion dealt with a questionnaire each prospective juror will be asked to complete.

Charlotte Observer attorney Jon Buchan filed a motion asking that the finished questionnaires be made public. He argued that the public has the right to know — especially in such a high profile case.

Some questions dealt with race as well as the police. One question asked: Given incidents in other cities where white officers shot unarmed black men "do you have any strong feelings, positive or negative toward police?" Another asked jurors whether they have any feelings — "positive or negative" — about Charlotte police.

Kerrick's attorneys tried unsuccessfully to get the trial moved, saying extensive publicity made a fair trial unlikely for the officer in Mecklenburg County.

His attorneys said interest in the case has increased because of the national debate about race and aggressive police tactics that begin in August with the shooting death of Michael Brown in Ferguson, Missouri. In the past few months, several high-profile cases have fueled the issue. A white North Charleston, South Carolina, police officer was charged with shooting an unarmed black man in the back after a witness captured the encounter on his cellphone. And rioting erupted in Baltimore after the death of a black man who was fatally injured while in police custody.

The Charlotte case was set in motion about 2:30 a.m. Sept. 14, 2013. After giving a co-worker a ride home, Ferrell drove his car off a road and down an embankment and into some trees.

Ferrell couldn't find his cellphone to make a call, so he kicked out the rear window of his disabled car and went in search of help. He pounded on the door of a home, but the woman there thought he was a robber and called 911.

Three officers responded to the call, but Kerrick was the only one who fired his gun. Police reports showed Kerrick fired at Ferrell 12 times, hitting him 10 times. Ferrell, who had no criminal record, died at the scene.

At several earlier hearings, prosecutors and defense attorneys gave a glimpse of how they plan to approach the case.

One defense attorney, Michael Greene, told Ervin prosecutors have described Ferrell as an "unarmed black man" looking for help. But he said they would prove that was not the case.

George Laughrun, one of Kerrick's attorneys, said the testimony will show Ferrell had been smoking marijuana and drinking before the crash and that when he approached another officer he shouted: "Shoot me. Shoot me."

"I think they're going to try to profile Jonathan as an angry black man, as a thug, but they can't," he said.

After the shooting, Ferrell's family sued the city. Two months ago, Charlotte agreed to pay $2.25 million to settle the lawsuit.