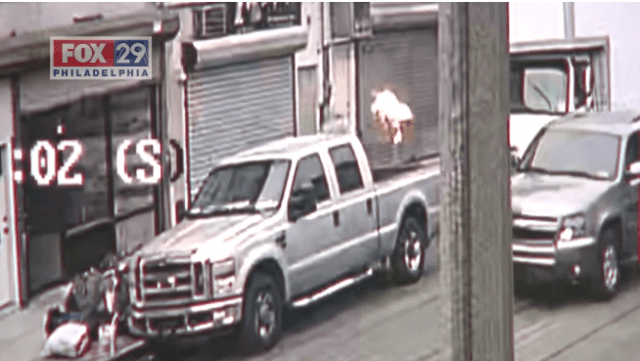 A suspect is in custody after tossing a Molotov cocktail at a Philadelphia day care facility. (FOX29 Philadelphia)

PHILADELPHIA — A man has been arrested for reportedly throwing a Molotov cocktail at a northern Philadelphia day care center early Tuesday morning, according to police.

Philadelphia Police said the man – who was wearing a black mask at the time – was spotted shortly after 9 a.m. tossing the fiery device at the exterior of the child care facility on Germantown Avenue, shattering the front window. He then got into the passenger side of a white Toyota that fled the scene, police said.

Video of the incident obtained by FOX 29 shows the moment the flames started burning on the exterior door of the building, as the suspect then casually walks away.

Afterward, police say the suspect got into the passenger side of a white Toyota which then fled the location. The unidentified suspect was later taken into custody at 2nd Street and Allegheny Avenue.

The driver was no longer present when police arrived.

The fire did not reach the inside of the building and no children were inside the day care at the time, police said. The fire marshal has declared the incident an arson, FOX29 reported.

As of Tuesday, charges were pending, according to FOX News.