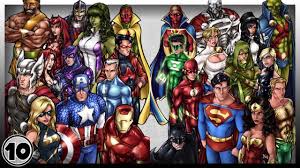 TIME magazine recently published an article called, “We’re Re-examining How We Portray Cops Onscreen. Now It’s Time to Talk About Superheroes,” in which the author trashes cops and superheroes by saying, “What are superheroes except cops with capes who enact justice with their powers?”

The author makes an odd argument that the Hollywood portrayals of police are far too positive by applauding the cancellation of Live PD and Cops.

“Legal procedurals and shoot-em-up action movies have long presented a skewed perception of the justice system in America, in which the police are almost always positioned as the good guys. These ‘good cop’ narratives are rarely balanced out with stories of systemic racism in the criminal justice system. The ‘bad guys’ they pursue are often people of color, their characters undeveloped beyond their criminality.”

If you thought you had heard it all, you obviously forgot what year it was and when history judges 2020, they are going to say everyone was insane and the fact that Time Magazine chose to publish this may be the most insane of them all….but then again, the year is young.

The article then transitions from law enforcement to the superheroes.

“But as we engage in this long overdue conversation about law enforcement, it’s high time we also talk about the most popular characters in film, the ones who decide the parameters of justice and often enact them with violence: superheroes.”

Superheroes, according to the author, have become “icons to more than just our children,” acknowledging that they are “beacons of inspiration,” including among protesters, who have “dressed as Spider-Man and Batman have turned up at recent Black Lives Matter demonstrations.”

The message, she says is that the figures are there to promote justice, like law enforcement, are generally good.

“And yet what are superheroes except cops with capes who enact justice with their powers?”

Calling most superheroes “white” and “either function as an extension of a broken U.S. justice system or as vigilantes without any checks on their powers,” are “In fact, real-life police officers sometimes adopt the symbolism of these rogue anti-heroes.”

And then, right on cue, the article brings up  “systemic racism” within the law enforcement and the superhero universe.

It’s “hardly surprising that so few reckon with issues of systemic racism—let alone sexism, homophobia, transphobia and other forms of bigotry embedded in the justice system or the inherent biases these superheroes might carry with them as they patrol the streets, or the universe.”

While the bias is seeping with each sentence written, the author leaves something vitally important out of her fact-less article. Unlike Superheroes, real-life police officers don’t have magical powers to win every fight or turn time back Avenger style.

114 police officers have given the ultimate sacrifice so far this year and it’s not even July yet.

And while you can cancel any Superhero you want, the day you cancel law enforcement will be the day of reckoning for America.

And if America subscribes to the nonsense of what Time Magazine is pushing, all that will be left will be movies with Superheroes and good luck getting one of them to help you when you are robbed in the parking lot walking back to your car after watching another subpar DC Movie.