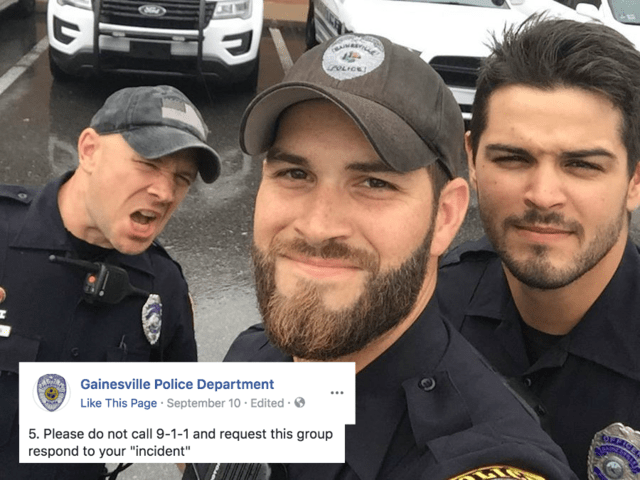 byJonathan Parker
Share and speak up for justice, law & order...

When do we learn?  And when I say “learn,” I mean actually change the behavior that causes us so many issues.

The Gainesville (FL) Police Department recently posted a picture that went viral and has come to be known as the “hot cop” selfie.  The picture shows Officer Michael Hamill and two others during the Hurricane Irma recovery.  It was removed by the agency this week, and Officer Hamill is under investigation because of comments he made on his personal Facebook profile dating back to 2011 – five years before he was sworn in as a police officer.

The USA Today also reported that Colin Kaepernick was not signed by the Baltimore Ravens recently because of statements on social media by his girlfriend.

The things you post today could come back to bite you in major ways at the most inconvenient time…even years later.  Like it or not, your comments could cost your job, reputation, or worse.

It’s sad that we continue to think as public servants that our personal comments and opinions posted publicly could not or should not reflect on our professional image or agency.  And by the way, everything you post is public even if posted behind the wall of privacy.  All it takes is one “friend” to share or screenshot what you post, and all privacy is lost.

And to think, someone spent countless hours scrubbing this guy’s page to find something that could be used against him.  Yes, that’s what “they” do.  Stop getting mad about “police haters,” stop arguing about what should or should not take place, and understand that it is what it is.  My mother used to say, “You’re cutting off your nose to spite your face.”

So what should you do?

First, go back and scrub your own social media accounts for any posts, pictures, or videos that are less than professional and delete them.  Look at it all through the lens of a media reporter or defense attorney.  If something you’ve said could be used against you or to discredit you then delete it.  If you are in your 20’s especially, think about what you might have been posting in your late teens and early 20’s.  Spending a day doing this could save you many days of trouble later.

Second, commit to personal accountability about what you post moving forward.  Be especially cautious about posting comments in public spaces, whether on the local or national news media sites or your favorite online law enforcement publication.  You don’t have to share every thought or opinion that comes to mind.  You may be ready to give someone a piece of your mind concerning their anti-police or other dissenting opinions, but as my Pastor used to say, you probably don’t have enough mind to spare giving away pieces of it.

Third, have an in-depth conversation with those closest to you and may post something that could be seen as “on your behalf” or that would reflect upon you.  In the same way you reflect upon your agency, your spouse, children, parents, and even close friends reflect upon you.  Now would be a good time to disconnect (as in unfriend) from those you really do not know or should not be associated with.

As a bonus word of advice, go ahead and review all of your privacy settings. You may need to do it post by post in some cases.  Make your information as difficult to access as possible.  But remember, there’s always a way.  Take precautions and be safe, but don’t post something you wouldn’t want used against you in court or printed in the local news.

We need to be shining examples of what those who wear the badge should be.  It doesn’t start with our online presence, but it certainly extends there.

Let’s be smart, take care of ourselves, and don’t forget to watch your six.