Thirty Guiding Principles: The Road To Hell is Paved With Good Intentions 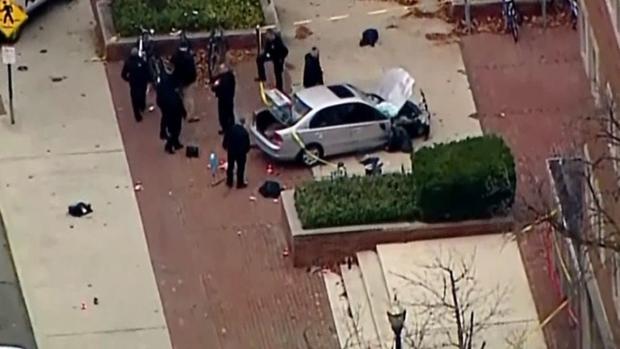 Photo:  Nine were injured at The Ohio State University when an ISIS inspired attack used a car to hit pedestrians.

In case you’re not familiar with it, The Police Executive Research Forum (PERF) recently released a report entitled “Use of Force:  Taking Policing to a Higher Standard.”

Within the report,  are thirty principles (policies) that the authors believe should be adopted by law enforcement agencies. While I would love to have the editorial space to give my comments on everyone of the principles, let me summarize my feelings on the paper like this.

Perhaps my biggest disappointment with the report is I haven’t found a single sentence contained within, that points to the fact that if people would just comply with officer’s lawful orders; the police use of force would drop to near zero.  Nevertheless, some of the suggested policies contained within, I fully support and agree with.  Some appear to be just a clarification of currently practiced standards.  Some are in conflict with case law set by the United States Supreme Court, which I don’t think is a good idea. However, of the most alarming proposals, a few are, IMHO, based upon political correctness; and they have the potential to cause great harm to our officers and citizens alike.

Such as? Well lets look at suggested policy number eight.

“8. Shooting at vehicles must be strictly prohibited. Agencies should adopt a strict prohibition against shooting at or from a moving vehicle unless someone in the vehicle is using or threatening deadly force by means other than the vehicle itself.”

This could only have been suggested or approved by people who have never had someone try and run over them with a vehicle.  In the real world, officers and citizens alike have been maimed for life, and sometimes murdered by being intentionally ran over with cars. But apparently, officers are supposed to be able to magically jump out of the way regardless of their physical abilities, limitations, or location. (Such as an alleyway between buildings  that will barely squeeze a car through)

So maybe you’re OK with that.  So let’s now look at the flip side of this policy, and why I think it’s incredibly dangerous.  What happens when a homicidal maniac takes a stolen 4×4 with oversized tires (for lack of a better description, a mini-monster truck) and purposely drives it through the fairgrounds, a concert, or other place where people are packed together and cannot escape? The only weapon he is using is the ~6,000 lb vehicle, yet he is crushing and killing people at a rate  far faster than if he was using a pistol.  An officer is on the scene, yet he is unable to stop the mass murder, as he is forbidden by policy to shoot the driver. How are you going to explain that one when the media shoves a microphone into your face?

Oh, I know. “THAT” would never happen.  There was a day many people would have said no one would park a truck bomb in front of a Government building that contained a day care center, until Timothy McVeigh did just that. On Sept 10, 2001, many people would have believed that no one would ever intentionally fly an airplane into a skyscraper, until they did twice the next day.  Our officers are facing unprecedented levels of immorality and viciousness today. If you’re not considering unconventional acts of evil when setting policy, you’re not preparing you’re officers to protect your citizens from what they may face any day. I don’t want to sound like I’m slamming PERF’s entire project and efforts, as some of the policy suggestions within have some very positive merits. However, I sincerely think it needs to be revised in several areas.

I would really like to see a debate style, open forum take place between PERF, a panel of independently selected, nationally recognized, top-tier use of force experts, and a group of independently selected patrol officers from across the country to compare and contrast doctrines before departments begin adoption of these policies.   If I’m right about suggested policy # 8,  (and if you disagree with my assessment, I’d like to hear from you as to why) isn’t it possible that there may be other items that need revision before everyone jumps on the bandwagon of good intentions?

Share and speak up for justice, law & order...
Tags: perftactics